The Tory plan for the first 100 days of government 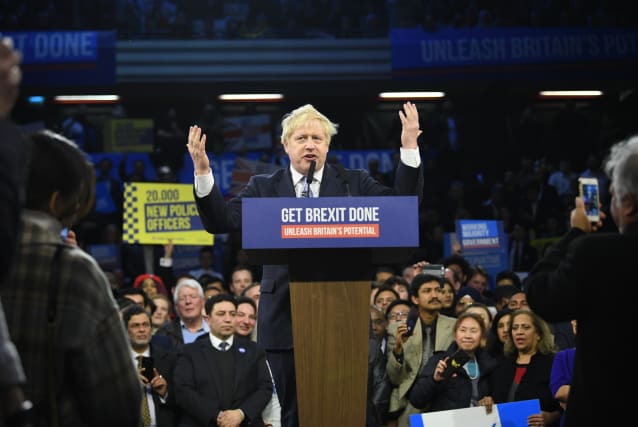 Boris Johnson has promised that 2020 will be the year that Brexit uncertainty finally comes to an end – and he plans to take the UK out of the EU in his first 100 days in government.

The Prime Minister has consistently vowed to leave the EU by January 31 and then finalise a trade deal with Brussels within 11 months, to meet the transition period deadline.

But the viability of that time frame has been questioned in Brussels, with the European Union’s chief negotiator Michel Barnier branding it “unrealistic”.

The Tories plan to announce their legislative programme on December 19 in a new Queen’s Speech.

The EU Withdrawal Act Bill will also be brought back to the Commons before Christmas.

Prime Minister Boris Johnson holds his dog, Dilyn, after casting his vote in the 2019 General Election at Methodist Central Hall, London (Jonathan Brady/PA)Before 100 days have passed, the Conservatives have said they would have delivered a “post-Brexit Budget” in February which will cut taxes for hardworking families, changed the law to end the automatic release of serious violent and sexual offenders at the halfway point, and launched a review of defence, security and foreign policy.

The party said in the first 100 days they would legislate for a funding increase to schools, change the law to increase the amount that migrants pay to use the NHS, begin cross-party talks to find a solution to the challenge of social care, and finalise an agreement with mobile phone operators to improve mobile service in the countryside.

The party also said they will have introduced:

– legislation to ensure the extra £33.9 billion per year they say they are putting in to the NHS by 2023 is enshrined in law

– legislation to create a system which prevents “vexatious claims” being brought against Armed Forces veterans.

They have also promised to set out future schemes for trade, agriculture, fishing and the environment once the UK leaves the EU.

But delivering those schemes will rely on trade deals with the EU and others – and they will take many more than 100 days to sort out.