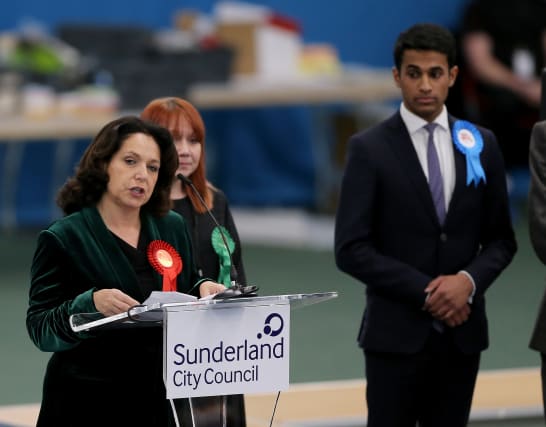 Two of Sunderland’s newly re-elected Labour MPs said the party must change with the third admitting Jeremy Corbyn was a factor on the doorstep.

Julie Elliott, who retained Sunderland Central but with a majority down from 9,997 in 2017 to 2,964 over the Tory candidate, told the PA news agency: “It’s very clear what needs to be done.

“It’s not just him, it’s the entire leadership team.

“They have led us to the worst result in my life-time if the exit polls are true.

“We have lost two elections under this leadership team, they have had their chance.”

She added: “We absolutely have to refocus and be very ruthless with ourselves in the Labour Party to get in a team that will deliver a general election victory.”

From the podium after she won, she called for the party to realign itself to the centre-left.

Bridget Phillipson, who retained Houghton and Sunderland South but with a reduced majority in 2017 of 12,341 down to 3,115, said it was a truly terrible night for the party.

She added: “I care less about what it means to the Labour Party and far more what it means for the working people in this community and across our country who have had a really difficult 10 years and life is going to get much tougher still for them.”

She said: “I think a long and difficult path now lies ahead for the Labour Party if the exit polls turn out to be the case.

“There’s no escaping Jeremy Corbyn was a big problem on the doorstep – of course Brexit did come up, but not by any means the same scale.

“It’s not all about one person, I think there is a growing sense that the Labour Party is out of step with the values and priorities of working people and we are going to have to sort that out.”

Sharon Hodgson who retained Washington and Sunderland West with a majority down from 12,940 to 3,723, said she felt voters sensed a “disconnect” with the party.

She said Brexit had been the major issue throughout in a city which had strongly backed leaving the EU in the 2016 referendum even though that could impact the major employer Nissan.

She said Mr Corbyn did come up on the doorstep when she was campaigning, but so did previous Labour leaders at other general elections.

Ms Hodgson said she sensed for the first time that people were unhappy to see her campaigning.

“People didn’t want to even engage,” she said.