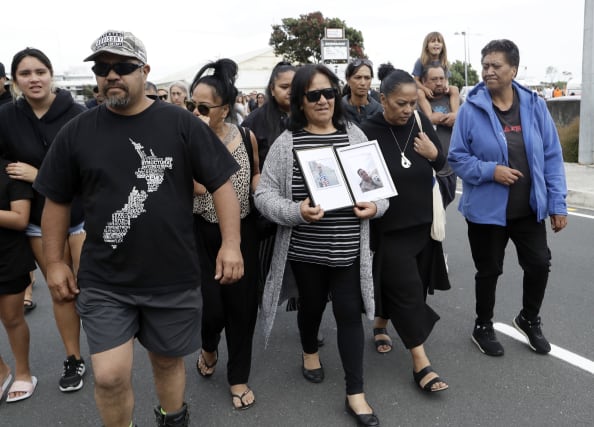 Six bodies have been taken off volcanic White Island in New Zealand following Monday’s eruption which has left 16 people dead with many more being treated in hospital.

New Zealand police and defence force personnel began the retrieval operation at first light on Friday, despite ongoing warnings of further activity from the volcano.

While the rescue team successfully recovered six bodies, the search was continuing for two more bodies, believed to be those of New Zealand tour guides.

Police said the recovered bodies had been transferred via helicopter to a navy ship, the HMNZS Wellington, and would be taken to nearby Auckland.

“I would like to acknowledge the recovery team for their efforts and the bravery they have shown today,” New Zealand Police deputy commissioner John Tims said in a statement.

The recovery mission began amid sombre scenes near the island, 30 miles off the coast of the Bay Of Plenty on the north-east side of New Zealand’s North Island.

After police confirmed conditions were stable enough to allow the retrieval operation to proceed, a traditional blessing was held at sea with family members of the victims, as two New Zealand Defence Force helicopters took off from the nearby coastal town Whakatane.

Eight military specialists wearing protective clothing and using breathing apparatus were involved in recovering the bodies, as scientists warned of toxic and corrosive gases on the island.

Police, military and other authorities monitored the recovery operation from a ship stationed just off the island.

Deputy Commissioner Mike Clement said the ground operation was taking longer than expected due to the weight of the protective equipment.

Volcanologists on board the Wellington, using electronic monitoring equipment, provided the recovery team with real-time information on the volcano’s behaviour.

A total of 47 people were on White Island, New Zealand’s most active volcano, when the eruption occurred, including two British women who were among those admitted to hospital.

Dozens of people were severely burnt in the eruption, with volcanologists speculating many may have been hit by fierce jets of scalding steam bursting laterally from the volcano.

A total of 19 victims were still being treated on Thursday local time in intensive care and burns units at several hospitals across New Zealand.

A further seven had been flown to Australian hospitals.

With many of the victims suffering severe burns, medical officials have ordered extra skin from skin banks in the US.

Monitoring agency GeoNet said on Thursday local time that the White Island’s volcanic alert had been lowered to level two after it was briefly raised to four on Monday.

White Island is the tip of a mostly under-sea volcano 30 miles off New Zealand’s North Island and has been a popular attraction visited by thousands of tourists each year.