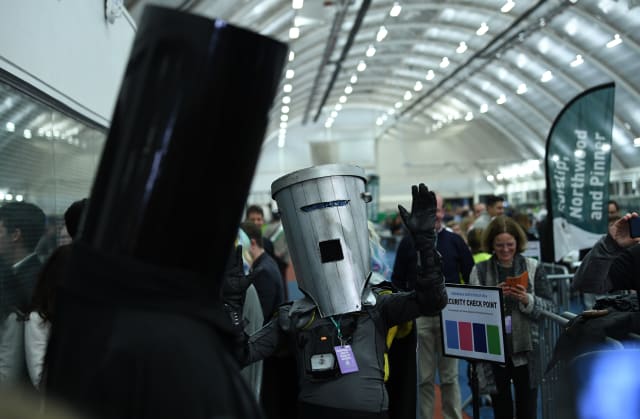 Political rivals Lord Buckethead and Count Binface have clashed in the Prime Minister’s constituency of Uxbridge and South Ruislip.

With Boris Johnson not expected to appear in Uxbridge for some time, it was left to the fringe candidates to take centre stage as the election count got under way,

Independent Count Binface told the PA news agency: “If I get a big fat zero that would be a record.

Comedian Jon Harvey, who plays the Count, was seen mocking Lord Buckethead – making a thumbs down behind his back, shouting “Fake news” and singing the American national anthem.

Mr Harvey previously ran as Lord Buckethead in Theresa May’s constituency in 2017, but cited “an unpleasant battle on the planet Copyright” as the reason behind the switch to Count Binface.

A different person has donned the Lord Buckethead costume, and the two were seen clashing at the count.

When asked to stand together for a photo, Lord Buckethead said: “We are going to violate some serious intergalactic treaties.”

Count Binface has been critical of the Prime Minister on a number of issues, including “his get-Brexit-oven-ready-microwave nonsense”, but he did promise to treat the Tory leader with respect should he meet him.