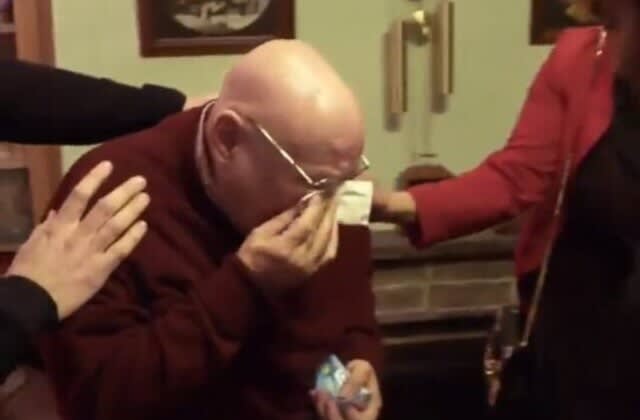 A lonely pensioner was moved to tears when BBC Breakfast presenter Dan Walker surprised him with a Christmas tree.

Terrence, 78, had told viewers during a previous appearance on the BBC One show that he had spent Christmas Day alone for the last 20 years.

He wept, as did viewers, after Walker and Oldham College students arrived at his house.

They surprised him with a Christmas tree, while the college's choir sang Silent Night outside his door.

Terrence has spent the last 20 Christmas Days on his own.
So #BBCBreakfast, @mrdanwalker and @OldhamCollege wanted to bring him some Christmas cheer 🎄❤️ pic.twitter.com/TapFjtAGbe

The pensioner told Walker: "I used go to my mother's on Christmas Day because I always cooked a meal for her here.

"I used to buy her little bits all the time, like cigarettes, and parcel them all up at Christmas and put them in a pillowcase and take them to her.

"One day, I'll never forget, she said, 'Without you bringing me my presents I wouldn't have any presents would I?'

"I often think about that now. People on their own don't get any presents."

"Remember other people rather than always thinking about yourself"@JohnBarrowman tells #BBCBreakfast why it's important to remember people like Terrence at Christmas 🎅 pic.twitter.com/3rEvkyYwRj

The pensioner will be having Christmas dinner with a 90-year-old woman who has dementia this year, through his work with the charity Age UK Oldham.

Viewers at home sobbed at the pensioner's emotional response to the tree and Walker tweeted later that he was "having a little moment".

Gary Lineker tweeted of Walker's gesture "this is joyous", while Gabby Logan wrote: "This is wonderful and when you finish shedding a tear head to Age UK's website. It's really easy to make a donation.

Loneliness is one of the most pressing issues facing our older people. Terrence is an Age UK volunteer and spoke to BBC Breakfast about how befriending has transformed his life.
If Terrence has inspired you, you can get involved by visiting https://t.co/dhm3Kkd3f5#Terrencehttps://t.co/PjN9PDN0ua

Later, John Barrowman appeared on BBC Breakfast and invited the pensioner to his stage show.

"Come and sit with my mum and dad and my husband and enjoy the show. I'll take care of everything," he said.