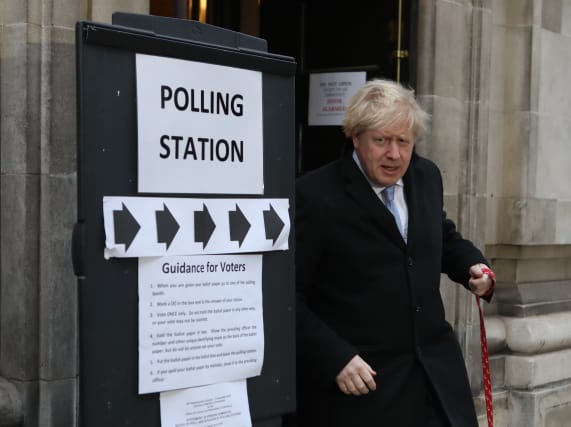 Boris Johnson is heading back to Downing Street with a comfortable Commons majority as his gamble on a snap general election paid off handsomely.

Jeremy Corbyn is expected to address his future when his constituency results are announced, amid fierce criticism and calls for him to stand down as party leader.

His party, which had 243 MPs when Parliament was dissolved last month, is forecast to lose 52 seats, according to a BBC/Sky/ITV exit poll, which put the Tories on 368 seats.

The poll predicted Labour would win just 191 seats, the Scottish National Party 55, Liberal Democrats 13, the Brexit Party none, Plaid Cymru three and Greens one – giving Mr Johnson a majority of 86.

Such a poor result would be the worst for Labour in terms of seats since 1935.

General Election 2019 exit poll (PA Graphics)However, they clung onto several North East seats including Newcastle Central, Sunderland Central, Newcastle-upon-Tyne East and Houghton and Sunderland South, but with much reduced majorities – and won Putney from the Tories.

The first results chimed with the exit poll prediction, as support for Labour slumped in its Brexit-voting heartlands.

The first big upset came as the Tories won Blyth Valley with a 10% swing from Labour – a seat they had held since 1950.

The first big Labour scalp claimed by the Tories was shadow environment secretary Sue Hayman, who lost Workington on another 10% swing.

The typically working class ‘Workington Man’ voter was identified as a key target by a right wing think tank at the start of the election campaign.

The Tories went on to take a succession of other Labour seats across the north of England and in Wales, including Darlington, Peterborough, Blackpool South, Wrexham and the Vale of Clwyd.

Labour’s Gareth Snell predicted his own defeat ahead of the result in another former stronghold, Stoke-on-Trent Central, telling PA: “I’m going to lose badly and this is the start of 20 years of Tory rule.”

Like Blyth Valley, Stoke Central has been Labour since 1950.

Sources in other Labour heartland seats including Bishop Auckland – which has been held by Labour since 1935 – were also predicting Tory gains.

The Prime Minister greeted the poll by tweeting: “Thank you to everyone across our great country who voted, who volunteered, who stood as candidates.

“We live in the greatest democracy in the world.”

Despite a major push by Labour, Mr Johnson looked set to retain his own Uxbridge and South Ruislip seat, with one Tory source saying: “He will not lose.”

The PM entered the election without a majority, having just 298 Tory MPs, after some quit the party and he withdrew the whip from others when they rebelled over Brexit.

If the exit poll proves to be accurate, Mr Johnson will return to Number 10 on Friday in a position to easily drive through his Brexit deal and take the UK out of the European Union next month.

The result, the largest majority for a Conservative leader since Margaret Thatcher in the 1980s, would be seen as a triumph for his tightly-controlled campaign, which was largely gaffe-free until the final week.

The future of the Lib Dem leader Jo Swinson also appeared uncertain, with the joint leader of East Dunbartonshire council saying “it is on a knife edge” whether she will lose her seat to the SNP.