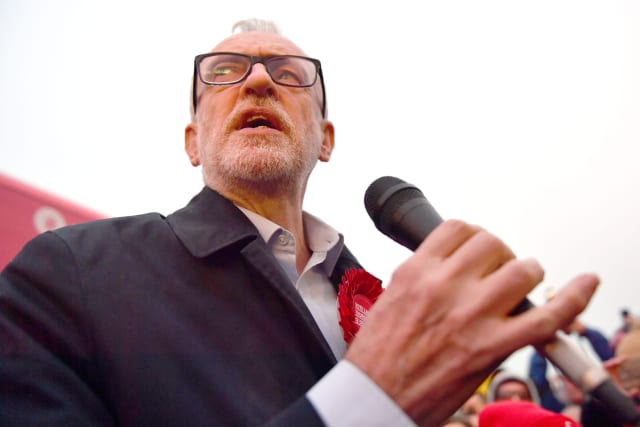 Jeremy Corbyn was quickly coming under fierce criticism as Labour looked set to face a crushing electoral defeat with the exit poll predicting the Tories securing a strong majority.

The official party line on Friday was to blame Brexit for dominating the discourse, but the Labour leader was quickly being cited as being the greater problem on the doorstep.

Tensions swiftly returned to the surface when the poll suggested Labour would slump 52 seats to 191 while the Tories would surge to 368 and win a majority of 86.

With Labour’s worst result since 1935 forecast, the party lost Blyth Valley to the Conservatives.

Shadow chancellor John McDonnell sought to blame a public discourse in which “Brexit has dominated” and defended the left-wing policies adopted by him and Mr Corbyn.

But Mr Corbyn will face overwhelming pressure to resign having suffered his second general election defeat.

Ian Murray, who previously served as shadow Scotland secretary under Mr Corbyn and is trying to retain Edinburgh South, rejected the official narrative.

“Not Brexit but Corbyn. I’ve been saying this for years.

“The outcome is that we’ve let the country down and we must change course and fast.”

Labour’s Gareth Snell predicted his own defeat ahead in the Brexit-backing former stronghold of Stoke-on-Trent Central and called for the resignation of Mr Corbyn on the BBC.

“I’m going to lose badly and this is the start of 20 years of Tory rule,” he added to the PA news agency.

Phil Wilson, who faces a struggle to retain Tony Blair’s former seat of Sedgefield, was highly critical of the Brexit defence.

“For @UKLabour leadership to blame Brexit for the result is mendacious nonsense. Jeremy Corbyn’s leadership was a bigger problem. To say otherwise is delusional,” he tweeted.

“The Party’s leadership went down like a lead balloon on the doorstep. Labour’s leadership needs to take responsibility.”

Former culture secretary Ben Bradshaw, who was trying to retain Exeter for Labour, said he has the data to show the “overwhelming negative” among every voting group was the leadership and not Brexit.

Ahead of the election, Labour sources had been predicting that Mr Corbyn would stay on as interim leader into the new year as a leadership battle is fought if the Tories won a majority.

Mr McDonnell told the BBC he was shocked by the exit poll, having thought the polls were narrowing in what he described as a “Brexit election”.

“If it is anywhere near this it will be extremely disappointing for the party overall and for our movement,” he said.

“We thought other issues could cut through and there would be a wider debate, from this evidence there clearly wasn’t.”

Mr McDonnell cited “despair” among the electorate at wanting an end to the Brexit saga, adding: “I think this Brexit frustration has broken through.”

On his and Mr Corbyn’s future, he cautioned that the actual results needed to be seen but said: “The appropriate decisions will be made and we’ll always make the decisions in the best interests of our party.”

Labour’s Dagenham East candidate Margaret Hodge, a vocal critic of Mr Corbyn over his handling of anti-Semitism in the party, said the poll suggested an “utter failure” of “Corbynism”.

Shadow justice secretary Richard Burgon was following the script to blame the “Brexit election” and suggested the party could continue in the same vain saying the next election will be different “given Johnson’s Thatcherite agenda”.

“We’re going to hear the Corbynistas blame it on Brexit and the Labour Uber Remainers blaming Corbyn,” she said.

“Both are to blame for what looks like a terrible night for Labour.

“Both have taken for granted Labour’s heartlands.”