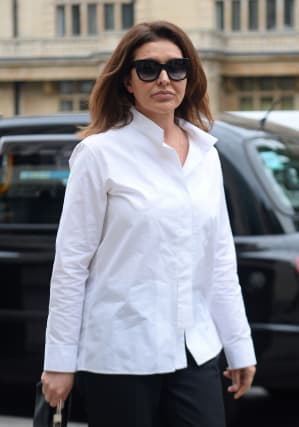 The wife of a “fat cat international banker” is seeking to overturn the UK’s first unexplained wealth order (UWO) at the Court of Appeal, arguing that it was based on her husband’s conviction after a “grossly unfair trial” in Azerbaijan.

Zamira Hajiyeva – who spent more than £16 million at Harrods in a decade – is attempting to overturn a UWO obtained by the National Crime Agency (NCA) against a property in Knightsbridge, central London, which was purchased for £11.5 million in 2009 by a company incorporated in the British Virgin Islands.

Her husband, Jahangir Hajiyev, was the chairman of the state-controlled International Bank of Azerbaijan from 2001 until his resignation in 2015, and was later sentenced to 15 years’ imprisonment for fraud and embezzlement.

But Mrs Hajiyeva, 56, argues that her husband’s conviction – which she says was “the central feature” of the NCA’s application for the UWO – was a “flagrant denial of justice”.

Her barrister, James Lewis QC, told senior judges in London on Thursday that Mr Hajiyev’s trial was “nothing of the sort”, and that his lawyers had not been permitted to cross-examine key witnesses or call any witnesses of their own.

He submitted that “shorn of Mr Hajiyev’s conviction, it is wholly unrealistic to suggest that the NCA could have sought and obtained the UWO”.

Mrs Hajiyeva was the first person to be made subject to a UWO, a new power brought into force last January under so-called McMafia laws – named after the BBC organised crime drama and the book which inspired it.

A UWO allows the NCA to seize someone’s assets if they believe the owner is a politically exposed person (PEP) – someone from outside the European Economic Area in a position of power that makes them liable to bribery or corruption – and they are unable to explain the source of their wealth.

But Mr Lewis argued that Mr Hajiyev was not a PEP because the law which introduced UWOs required him to have been “entrusted with prominent public functions by an international organisation or by a state”.

He added that the NCA had “seriously mischaracterised” Mr Hajiyev’s job by describing him as a “government official”, arguing that the International Bank of Azerbaijan was not a “state-owned enterprise”.

He submitted: “The reality is that Mr Hajiyev was the chairman of Azerbaijan’s largest bank … in which the Azerbaijani government had a 50.2% stake in 2008, rising to 60% in 2013.

“Mr Hajiyev was therefore no more a ‘government functionary’ than Sir Howard Davies, chairman of the Royal Bank of Scotland (in which the UK Government has a 73% stake).”

In written submissions, Jonathan Hall QC, for the NCA, said Mrs Hajiyeva’s interpretation of the law was “unsustainable”, submitting that the International Bank of Azerbaijan was a state-owned enterprise and that Mr Hajiyev was a PEP.

He said: “There is a strong domestic and international public interest in investigating, deterring and preventing serious crime – including money laundering and corruption – and recovering the fruits of such crime.”

In a High Court ruling in October, dismissing Mrs Hajiyeva’s attempt to overturn the UWO, Mr Justice Supperstone said that “three separate loyalty cards were issued to Mrs Hajiyeva” by Harrods, where she spent more than £16 million between September 2006 and June 2016.

Court documents later released to the media revealed that Mrs Hajiyeva blew £600,000 in a single day during a decade-long spending spree.

The NCA subsequently seized jewellery worth more than £400,000 from Christie’s over suspicions about how the items were purchased while the auction house was valuing the jewellery for Mrs Hajiyeva’s daughter.

In September, Mrs Hajiyeva fought off an attempt to extradite her to Azerbaijan to face fraud and embezzlement charges on the grounds that she would not get a fair trial.

The Lord Chief Justice, Lord Burnett – sitting with Lord Justice Davis and Lord Justice Simon – will hear Mrs Hajiyeva’s challenge over a single day and judgment is expected to be reserved.