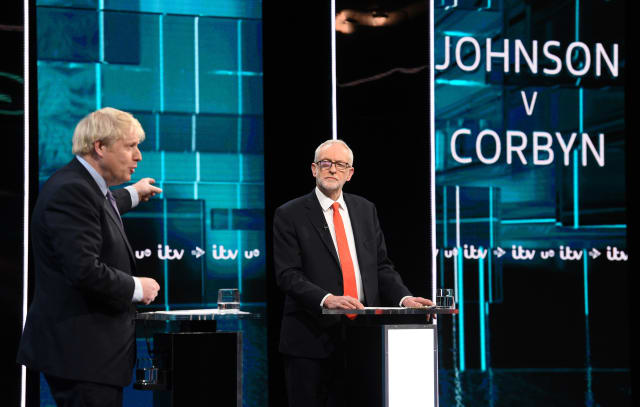 A poll carried out only days before votes are counted suggests the Conservatives will win the General Election – but a quarter of the electorate have said they could still change their minds.

The final poll by Ipsos MORI for the London Evening Standard newspaper puts Boris Johnson’s Tories 11 points ahead of Labour.

It has the Tories on 44% and Labour on 33%, while the Liberal Democrats, according to the poll results, are on course to secure 12% of the vote.

If the prediction bears out, it would represent the largest share of the vote for the Tories at a General Election since Margaret Thatcher’s first victory in 1979.

According to the newly released data, the Green Party would secure 3% of all votes, Nigel Farage’s Brexit Party 2% and other parties would mop up the remaining 6% of the vote share.

But the company – which was still interviewing people on the day before polls opened – warned any popping of Tory Champagne corks would be premature, with one in four voters declaring they could alter their voting intentions on polling day.

The number of wavering voters is higher than two years ago when the 2017 General Election produced a hung Parliament result, Ipsos MORI said.

Gideon Skinner, head of political research for the company, said there was still the “potential for more switching”.

“Labour has squeezed the Liberal Democrat vote share over the course of the campaign but our final poll suggests this has not been enough to prevent the Conservatives scenting victory,” he said.

“Overall, the Conservatives have managed to keep their vote from 2017 more successfully than Labour, while Boris Johnson retains his lead over Jeremy Corbyn as the most preferred Prime Minister.”

He added: “The country is not unanimous, though, with clear splits by age as well as by other groups, and the number of people who said they might still change their mind is slightly higher than in 2017, with potential for more switching between Labour and the Liberal Democrats.

“And despite a record number saying the election outcome is very important to them, there are signs that the public is not wholly enthusiastic about the choices they face from either party.”

More than 2,200 people aged 18 or over were surveyed across Britain for the poll, with all interviews conducted by phone from December 8-11.

The research indicates Mr Johnson’s party will retain 85% of their voters from 2017 and Mr Corbyn’s Labour will keep 79% of its support from two years ago.

Labour, just as in 2017, continues to hold a 26-point lead over the Conservatives among people aged between 18 and 35, while the Tories hold a 37-point lead over Labour among those aged 65 and over.

Mr Johnson’s party leads by 15 points among men and six points with women.

The Prime Minster leads rival Mr Corbyn in the final days of the campaign when it comes to who the public think would be the most capable at the country’s helm.

Close to half those surveyed (43%) think Mr Johnson would be the most capable, although that was down by two points on last week.

Just under a third (29%) said Mr Corbyn, while one in five said neither.