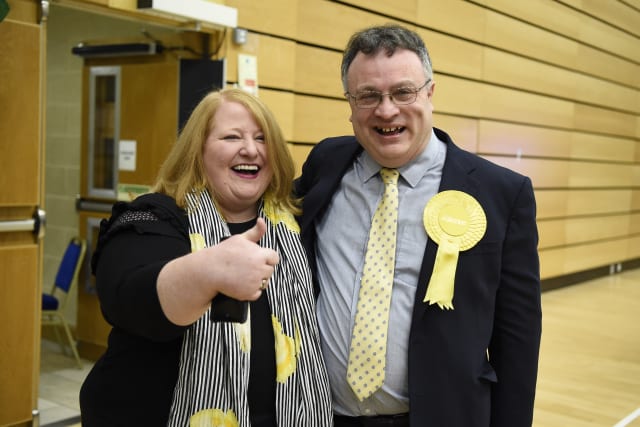 Here is a run-down of the winners and losers in Northern Ireland’s 18 constituencies at the 2019 General Election.

The staunchly pro-Remain Alliance Party has taken Northern Ireland’s first Westminster seat in a major upset for the DUP.

Stephen Farry cruised to victory by around 3,000 votes in the affluent Belfast commuter constituency of North Down.

He hailed a resounding vote against Brexit and pledged to work in Westminster to frustrate the EU exit.

Mr Farry said: “This is a victory for the values that this constituency has been known for for many years, those of moderation, rationalism and inclusion.”

“Indeed, all forms of Brexit are damaging to the UK and to us in Northern Ireland and in particular the Boris Johnson deal.”

Alliance leader Naomi Long celebrated with her victorious candidate with a hug and a wave for the cameras.

The last MP for North Down, independent unionist Lady Sylvia Hermon, was the sole Northern Ireland Remain voice in the previous Parliament.

Mr Farry’s defeated opponent, Alex Easton of the DUP, said his vote had gone up on previous showings and added he would be back.

Northern Ireland has been without a devolved government for almost three years after a fall out between the DUP and Sinn Fein.

Mr Easton said: “I do think that people need to start thinking about the future for Northern Ireland and I do think we do need to try to get the Assembly running as soon as possible and I hope I can work with my colleagues and other parties to make sure that we achieve that.”