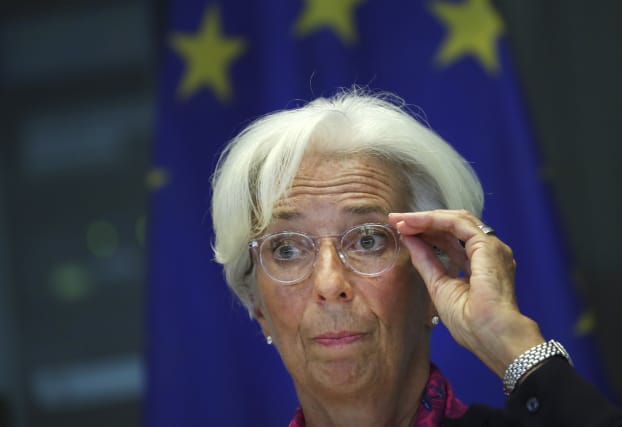 The head of the European Central Bank has said the economic slowdown in the countries that use the euro shows signs of bottoming out.

Christine Lagarde told reporters after the bank kept its monetary policies on hold that recent economic indicators are “weak overall” but “point to some stabilising in the slowdown of economic growth”.

It was the bank’s first policy meeting under newly appointed Ms Lagarde.

The bank left its deposit rate at minus 0.5% and its main refinancing rate at zero.

The decision to not change policy follows a similar one by the US Federal Reserve this week as central banks monitor the health of major economies.

Investors are now waiting for Ms Lagarde to give her first official assessment of the European economy at a news conference in Frankfurt, Germany.

Analysts think Ms Lagarde will stress that the economy still needs support from the central bank, and that policymakers must be on their guard against things turning out worse than expected.

Doubts have grown about how much good additional central bank action can do to support developed economies; the US Federal Reserve on Wednesday kept interest rates unchanged and signalled it would leave them alone through 2020.

Instead, interest is focused on Ms Lagarde, who presided over her first meeting since she was appointed by European leaders as the head of the institution that sets monetary policy for the 19 euro countries that use the euro and their 342 million people.

She is well known from her previous jobs as head of the International Monetary Fund and as French finance minister but investors will want to see how she communicates and explains the complexities of monetary policy to markets and voters.

Other themes that may come to the fore at her news conference are her plans for a review of the bank’s monetary policy framework and how it defines price stability, the goal it is supposed to seek under the European Union treaty.

There has also been discussion of whether the ECB should do more to support financing of projects aimed at fighting environmental pollution and climate change.

Analysts will look for signals on how she will manage dissent on the ECB’s 25-member governing council.

A minority criticised the measures enacted under predecessor Mario Draghi on September 12.

The rate is charged on excess cash left at the central bank overnight by commercial banks, so the negative rate is in effect a penalty that aims to push banks to lend the money to companies.