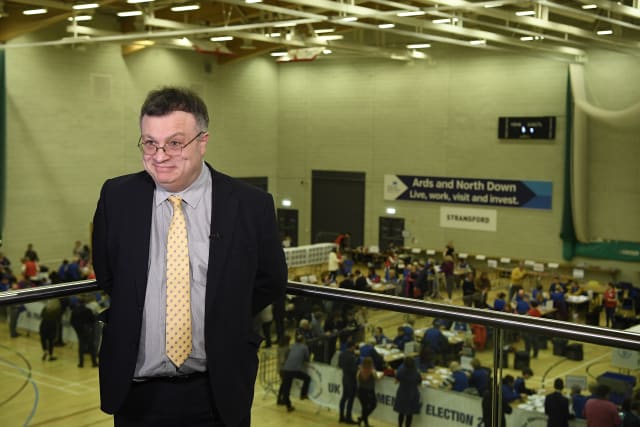 The staunchly pro-Remain Alliance Party has taken Northern Ireland’s first Westminster seat in a major setback for the DUP.

Deputy leader Stephen Farry cruised to victory with a majority of almost 3,000 votes in the affluent Belfast commuter constituency of North Down.

The seat had been a key target for the DUP after outgoing independent unionist MP Lady Sylvia Hermon decided not to run again.

Mr Farry’s victory provides further evidence of the so-called Alliance surge, coming as it does after a series of positive elections for the middle-ground cross-community party.

The result landed another blow to the DUP on what is shaping up to be a very disappointing election for the unionist party.

The predicted Conservative majority at Westminster will see the party lose its influential position as Westminster kingmaker while North Down is unlikely to be its only electoral set back in Northern Ireland.

The DUP also looks destined to lose its seat in South Belfast to the SDLP and it appears party deputy leader Nigel Dodds is in grave danger of losing his North Belfast seat to Sinn Fein’s John Finucane.

Sinn Fein sources are confident Mr Finucane has triumphed, a result that would represent a huge psychological defeat for unionism in the region’s most hotly contested battleground seat.

Mr Farry hailed his resounding vote as a blow against Brexit and pledged to work in Westminster to frustrate the EU exit.

“This is a victory for the values that this constituency has been known for many years, those of moderation, rationalism and inclusion,” he said.

“Indeed, all forms of Brexit are damaging to the UK and to us in Northern Ireland and in particular the Boris Johnson deal.”

The DUP is vehemently opposed to Mr Johnson’s Brexit deal, claiming it will create economic borders down the Irish Sea and weakened Northern Ireland’s place within the Union.

Long-standing DUP MP Sammy Wilson, who is on course to retain his East Antrim seat, insisted his party could still secure changes to the agreement despite the predicted Tory majority.

“Obviously we’d have preferred to be in a situation we were in the last Parliament where we did have the influence and where it was fairly marginal, however for the country it probably wasn’t a great thing because no decisions could be made,” he said.

“I still wouldn’t be totally dismayed insofar as a big majority could actually mean that Boris Johnson can go in and be fairly bullish with the EU when it comes to negotiations, and if he does do that then many of the problems the current deal is going to cause Northern Ireland could disappear.”

The election comes ahead of the latest bid to resurrect the crisis-hit institutions at Stormont.

Ahead of an anticipated round of negotiations on Monday, Sinn Fein vice president Michelle O’Neill said: “Whatever the results, Sinn Fein will be in the talks on Monday morning to work to secure a genuine power-sharing executive which is credible and sustainable to deliver good government and properly resourced public services to all.

“Sinn Fein will continue to represent people where it matters and stand up against Brexit.”