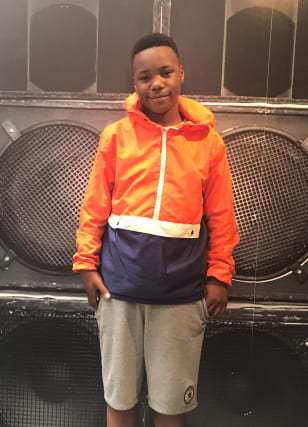 A teenager has been found guilty of the “cowardly and shocking” gang murder of a 14-year-old boy who was knocked off a moped and stabbed to death.

Drug dealer Ayoub Majdouline, 19, was one of five youths linked to the Mali Boys who drove around east London in a stolen Mercedes looking for members of the Beaumont Crew gang to attack.

When they came across Jaden Moodie, who was out dealing drugs on a scooter for the Beaumont Crew, they crashed into him and “butchered” him as he lay seriously hurt and defenceless on the ground.

CCTV footage was played in court of Jaden being catapulted over the car’s bonnet then subjected to a frenzied attack on the evening of January 8.

Jaden suffered nine stab wounds and bled to death in the road as the attackers ran back to the car and sped off, the court heard.

His family said “yes” and appeared emotional in court as Majdouline was found guilty of murder and possession of a blade by a majority of 11 to one.

Prosecutor Oliver Glasgow QC said: “14 seconds was all it took – Jaden did not stand a chance.”

He told jurors the “cowardly” attack was part of a “shocking wave of gang crime” across London that attracted ever younger people.

He said: “It is hard to believe that anyone, least of all teenagers who have only just become adults, could attack another human being in the way that this defendant and his accomplices set upon Jaden.

“No-one who watched the CCTV of Jaden’s attackers driving into him and then butchering him with their knives could fail to be disgusted by the injuries inflicted upon him.”

Jurors heard how the attackers had gone to great lengths to disguise themselves, covering their heads and hands.

As they calmly walked off, they threw away a knife and a pair of yellow rubber gloves which were recovered from a drain the next day, the court heard.

Jaden’s blood and the defendant’s DNA were found on both the knife and one of the gloves, jurors were told.

The day before, Majdouline was caught on CCTV at a Travelodge hotel in Walthamstow, with distinctive Nike Air Max trainers he was wearing during the knife attack on Jaden, the court has heard.

Burnt clothes, including Nike trainers, matching those of the attackers were later found in a churchyard, jurors heard.

Majdouline, from Wembley, north-west London, admitted dealing drugs for the Mali Boys but denied being present during the fatal attack.

After a troubled up-bringing, the defendant, who had an Irish mother and Moroccan father, turned to county lines dealing “to survive”, he said.

He had been caught with drugs and carrying knives, but despite serving time behind bars, went straight back to dealing.

The court was told he was identified by the National Crime Agency in 2018 as a victim of “modern slavery”, amid concerns of exploitation by older youths.

His father had died in 2015, having become the victim of an arson murder in north London, it can now be reported.

Jurors also learned that Jaden had been in trouble with police since he was a 13-year-old.

He was handed a youth conditional caution in March last year after police seized an air-powered pistol, Rambo knife and cannabis during an altercation in Nottingham.

In November last year, he admitted appearing in a Snapchat video with an imitation firearm.

The previous month, Jaden was found with crack cocaine at an address in Bournemouth, jurors were told

A jury deliberated for nine hours and 22 minutes for find Majdouline guilty of Jaden’s murder and possession of a knife.

The court heard efforts are continuing to identify the other attackers by their DNA.

Jaden was the youngest victim of a spate of gang violence linked to drug dealing in east London and across county lines.

It can now be reported that the trial coincided with another case at the Old Bailey involving the Mali Boys, which had been involved in long-running tit-for-tat violence.

Hamza Ul Haq, 21, Loic Nengese, 19, and a 16-year-old were found guilty of shooting dead Joseph Williams-Torres, 20, in March last year in Walthamstow, after mistaking him for a member of the Priory Court or Higham Hill gang.

Their trial had heard how Mali gang violence had escalated after one of their own, Elijah Dornelly, 17, was stabbed to death in Walthamstow High Street in May 2017.

The trials were briefly halted after a fight broke out in the Old Bailey cells between Majdouline and Ul Haq, leading to one dock officer being injured as he broke them up.