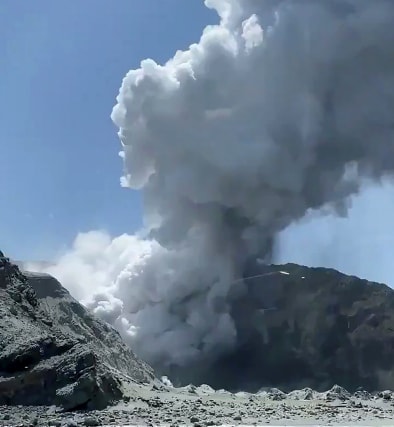 An operation to recover victims from a volcanic eruption which killed at least six people in New Zealand has been delayed amid fears of worsening conditions.

Six people have been confirmed dead following the eruption, while two British women are believed to be among the 30 people in hospital, with all but five in a stable but serious condition.

Meanwhile, the British High Commission in New Zealand has urged Britons travelling in the country to contact their family and friends to let them know they are safe.

– New Zealand’s Civil Defence ministry said it was “absolutely imperative” to retrieve the bodies, but “the prevention of further human harm must be taken into account”

– The first Australian victims of the eruption have been named by a family friend as Julie Richards, 47, and her 20-year-old daughter Jessica.

Counties Manukau District Health Board’s chief medical officer Dr Peter Watson told reporters that 22 patients were on airway support “due to the severity of their burns and other injuries”.

He added that supplies – including an additional 1.2 million square centimetres of skin – would be needed to meet patient demand and will be ordered from the United States.

“The nature of the burns suffered is complicated by the gases and chemicals in the eruption.”

National operation Commander Deputy Commissioner John Tims said: “The environment on the island has changed, (there has been) increased activity from earlier this morning.

“We are standing by to go back to that island.

“We are confident on our ability to deliver the rescue operation. But that is after we are sure that we can manage the real dangers that are on the island.”