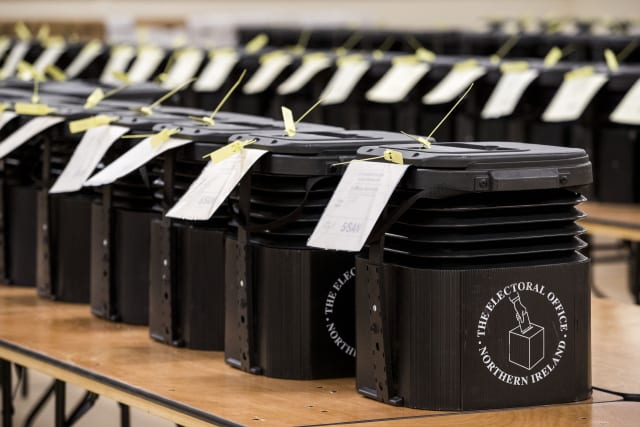 Final preparations are being made across Northern Ireland before voters head to the polls for Thursday’s General Election.

As the 102 candidates finish canvassing, election staff are gearing up for a day of voting followed by a night of counting at four count centres, after the polls close at 10pm.

On Wednesday ballot boxes were checked at a storage facility on the outskirts of Belfast, before being loaded on to lorries for transport to polling stations across 18 constituencies.

Rathlin Island’s ballot boxes were taken by ferry on an earlier sailing than previously planned on Wednesday, due to weather conditions.

Some 1,293,971 eligible voters can cast their ballots in Northern Ireland.

However fewer people are using postal or proxy methods to vote, according to figures released by the Electoral Office of Northern Ireland.

The leaders of Northern Ireland’s two largest parties, neither of whom are candidates in this election, were tweeting from the last day of the campaign.

Her party are hoping to return with at least the ten MPs they won in 2017, to retain the influence they had in the last parliament.

The DUP is expected to come under pressure in a handful of constituencies, including South Belfast and North Belfast, but the party hopes to make a gain in North Down, where veteran independent Lady Sylvia Hermon has stood down.

Mrs Foster started the day with a visit to West Tyrone and Mid Ulster, before travelling to Upper Bann, where she expressed admiration for a 91-year-old party canvasser.

The party’s NI leader Michelle O’Neill spent time in the Foyle constituency, where her party colleague Elisha McCallion is expected to face a close race with SDLP leader Colum Eastwood.

Polling stations will be open from 7am to 10pm.