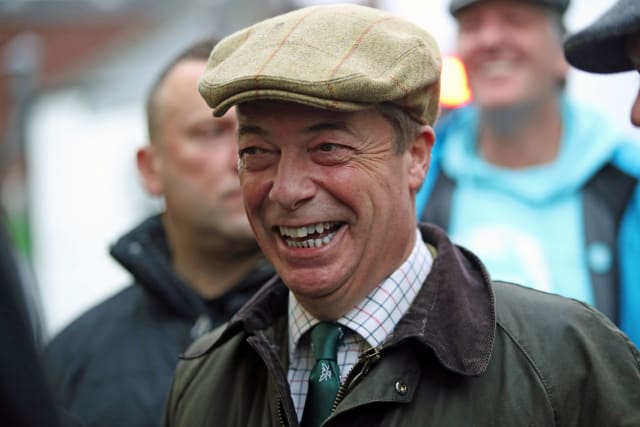 Nigel Farage will discover on Friday morning whether he has been successful in delivering the Brexit Party’s first MP.

Only founded this year, the fledgling Eurosceptic outfit had hoped to end 2019 with a “bridgehead” of pro-Brexit MPs in the Commons to hold the next prime minister’s feet to the fire on leaving the European Union.

With voters gearing up to have their say, here are a look at the high points of the six-week campaign, as well as the events the party would rather forget.

– What was the campaign high?

As the campaign kicked off in the first week of November, the Brexit Party, fresh from a stonking victory at the European Parliament elections in May, enjoyed highs of 13% in the polls.

Leader Mr Farage floated the idea of a “non-aggression pact” with the Conservatives and threatened to stand candidates in every seat if the governing party refused, giving rise to fears he could deny Boris Johnson an overall majority.

– What was the defining moment?

Mr Farage’s decision in November to stand down Brexit Party candidates in all 317 seats won by the Tories at the 2017 General Election changed the shape of the party’s campaign and, arguably, the national outlook.

The former Ukip leader said the move was made to ensure the pro-Brexit vote was not split and risk allowing Remain-supporting parties, especially the Liberal Democrats in the South West, to make gains.

The shift allowed the party to pinpoint its efforts on securing scalps in a number of Labour marginals in England’s North and Midlands but also caused a massive hit to the party’s poll ratings.

– What was the campaign low?

Three Brexit Party MEPs quit the party only a week before polling day and were joined by the already-sacked MEP John Longworth in coming out in support of Tory leader Mr Johnson’s Brexit deal.

Annunziata Rees-Mogg, sister of Jacob Rees-Mogg, Lance Forman and Lucy Harris, along with Mr Longworth, said: “For those who want Brexit, Boris Johnson’s deal is the only option available.”

– Which region did Mr Farage visit the most?

The decision to stand down in almost half the available seats allowed Mr Farage to hone his campaign in on Labour Leave voting areas.

The North East was Mr Farage and Co’s main stomping ground, with the MEP making a host of visits to Tony Blair’s former Sedgefield seat and Hartlepool, where Richard Tice, party chairman and property developer, is hoping to cause an upset in a seat held by Labour since 1964.

Opting not to stand for election as an MP meant Mr Farage was free to tour the country in support of his candidates, although it opened him up to criticism that he was wary of adding to his tally of seven General Election losses as a parliamentary candidate.

– What was the most memorable quote?

Disparaging remarks about the Prime Minister’s Brexit deal and allegations it would “hinder” a free trade deal with the United States have featured frequently during the campaign.

But the pitch Mr Farage has made up and down the country at rallies is that “there will be no Brexit without the Brexit Party”.

His message has been that only Brexit Party MPs can be trusted to ensure Britain’s EU exit is delivered.