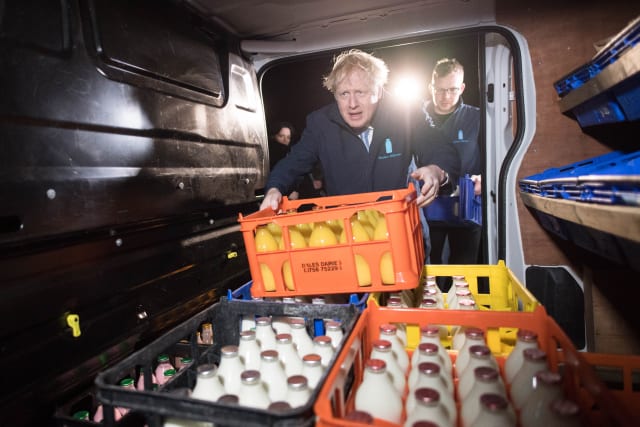 Boris Johnson played the role of milkman as his stunt-laden campaign tour entered its final hours.

He then travelled to Guiseley where he delivered a crate of items to one house.

Two bottles of milk already outside the property were removed before the Conservative Party leader arrived.

He knocked on the door, which was opened by civil servant Debbie Monaghan, 40, who said: “Look who’s here.”

She called to her husband Mark, 40, and said: “So nice to meet you, Mr Prime Minister.

“What are you doing up so early?”

Mr Johnson said he was delivering milk, orange juice, washing up liquid and other things.

He then reiterated campaign pledges, with Mrs Monaghan describing her husband as the “Brexit exit man”.

“It’s very early, I assume he’s travelled a long way but I’m going to vote Conservative so I’m quite pleased.”

Mr Johnson has previously driven a JCB digger through a polystyrene wall, made rock in Blackpool, played football, changed a wheel on a Formula One car and done various other activities in a series of election events.

He was earlier asked about the narrowing polls, to which he replied to broadcasters: “This could not be more critical, it could not be tighter – I just say to everybody the risk is very real that we could tomorrow be going into another hung parliament.

Pressed on whether he was nervous, Mr Johnson replied: “We’re fighting for every vote.”

Mr Johnson’s final day of campaigning sees him zig-zag across the country before concluding with a rally for Tory activists.