Have experts found the earliest family snap taken at Stonehenge? 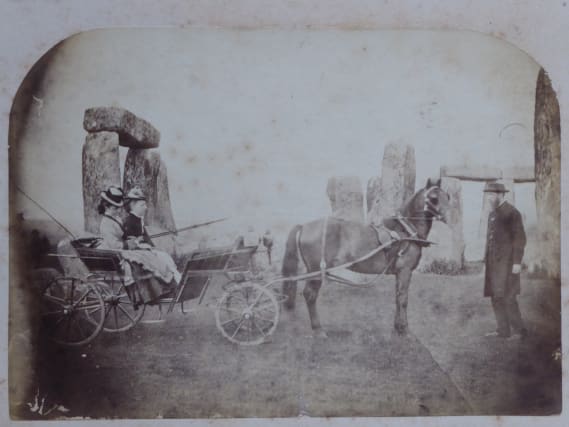 Experts believe they have discovered the earliest family photograph taken at Stonehenge.

English Heritage asked people to send in their pictures to mark 100 years of public ownership of the prehistoric monument..

After sifting through more than 1,000 photographs, they believe some images from 1875, showing a family dressed in their finery, are the oldest.

One picture shows the group sitting on the stones – which is now only allowed on special occasions – with a picnic rug and what appears to be a bottle of champagne.

In another, some of them are in a horse-drawn carriage.

“Right up until the 1920s and ’30s people did dress up for days out like this, in their Sunday best, suits and hats.”

The pictures will feature with more than 140 others in the exhibition Your Stonehenge.

Famous photographer Martin Parr took the newest image in the exhibition – an unknown couple kissing while taking a selfie against the backdrop of the stones during the 2019 Autumn Equinox.

“The exhibition shows how photography has changed – the rise of the selfie stick and the smartphone and how taking a photograph is a very different thing now,” curator Ms Greaney said.

“The way that people pose – people’s faces have got closer to the camera until they are taking a picture of themselves more than they are of Stonehenge,” she told the PA news agency.

Of the possibility of finding an older family photograph, she said: “It would be quite nice if somebody comes forward and says ‘We’ve got an earlier one’.”

Ten photographs in the exhibition have been selected by Parr, who wants to track down the pair in the selfie.

The earliest known photograph of Stonehenge, not featuring a family, is thought to date back 22 years earlier.