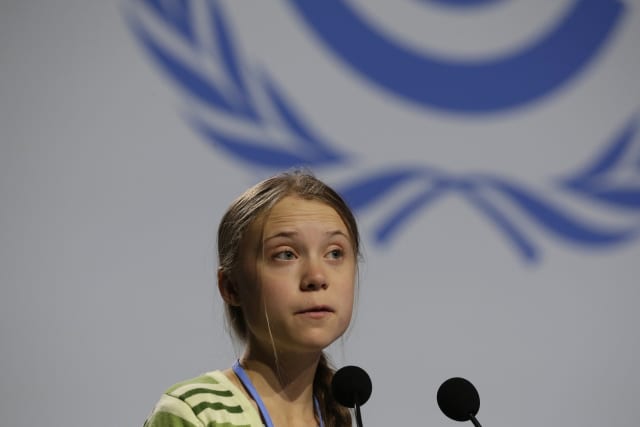 In a speech at the COP25 talks in Madrid, Spain, the Swedish teenager, who inspired the worldwide school strikes for climate movement, said: “Our leaders are not behaving as if we are in an emergency.”

She said the science showed that, at the current rate of emissions, the world is set to use up the whole “carbon budget” – the amount of pollution that can be put into the atmosphere and still keep global warming to 1.5C – in eight years.

Countries previously committed to curbing global warming at “well below” 2C above pre-industrial levels and to pursue efforts to keep temperature rises to 1.5C in the Paris Agreement secured in 2015.

Governments meeting at the talks are now under pressure to take more ambitious action to cut greenhouse gases, which continue to rise, to avoid the worst effects of climate change.

Greta warned that “even at 1C people are dying from the climate crisis” and the science showed that going beyond 1.5C risks destabilising the climate and hitting irreversible tipping points such as melting glaciers and permafrost.

She said: “Finding holistic solutions is what the COP should be all about, but instead it seems to have turned some kind of opportunity for countries to negotiate loopholes and to avoid raising their ambition.

“Countries are finding clever ways around having to take real action, like double-counting emissions reductions, and moving emissions overseas, and walking back on their promises to increase ambitions, or refusing to pay for solutions or loss and damage.

Greta, who sailed across the Atlantic to attend the talks in Chile, before having to sail back again because they were moved to Spain due to civil unrest in the South American country, has made a series of hard-hitting speeches at international events in the past year.

In her latest talk, she focused on the science and the “misleading” behaviour of politicians and big business.

She said countries which had committed to reducing their emissions to zero by a certain date, as the UK has done with its legally binding pledge for net-zero by 2050, appeared impressive at first glance.

But “this is not leading, this is misleading”, she said, warning that the targets did not include aviation and shipping, or the emissions created by goods made in other countries and imported – and did include “offsetting” emissions.

“Zero by 2050 means nothing if high emissions continue for even a few years. Then the remaining budget will be gone.”

She said real, drastic emissions cuts were needed, and carbon had to stay in the ground to keep temperature rises below 1.5C.

And she warned: “The biggest danger is not inaction; the real danger is when politicians and CEOs are making it look like real action is happening, when in fact almost nothing is being done apart from clever accounting and creative PR.”

She finished her speech on a more hopeful note, telling delegates: “In just three weeks we will enter a new decade, a decade that will define our future.

“Right now we are desperate for any sign of hope.

“There is hope – I’ve seen it – but it does not come from the governments or corporations, it comes from the people.

“The people who have been unaware are now starting to wake up.”

She said people have democracy – all the time, not just at elections – and that public opinion runs the free world.

The teenage activist, who began the climate strikes with a solo protest outside the Swedish parliament in August 2018, said: “Every great change in history comes from the people. We can start the change right now, we the people.”