Ferry captain found not guilty over crash with yacht 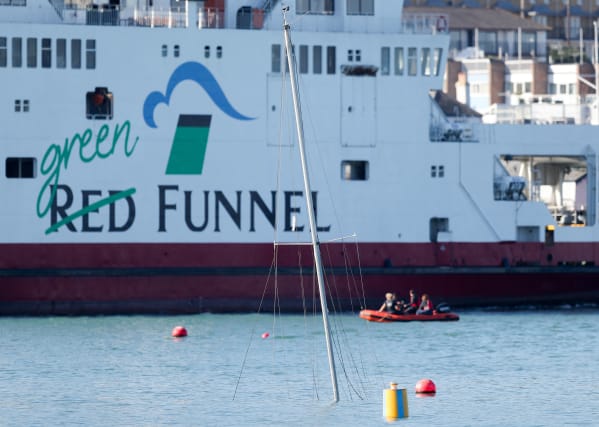 A ferry captain has been acquitted of two maritime offences after his ship carrying 202 people was in collision with a motor yacht.

Captain Ian Drummond was accused at Southampton Magistrates’ Court of failing to keep a proper lookout ahead of the accident involving the Red Funnel ferry as it headed to East Cowes on the Isle of Wight on September 29 last year.

The 305ft ferry, named Red Falcon, was in collision with the 32ft motor-cruiser, Phoenix, in the Thorn Channel, off Southampton, as both vessels were heading across the Solent.

The ferry was carrying 20 crew and 182 passengers and the motor cruiser was being sailed by owner Peter Jackson, 57, and wife Julie with two others on board, but there were no injuries suffered in the accident.

Mr Drummond, 63, was sitting in the “lookout’s chair” at the time of the collision and expert witness Captain John Simpson, a master mariner, told the trial that standing up would have helped eliminate the ferry’s blindspot.

But District Judge Anthony Callaway ruled that Mr Drummond had used his experience to remain seated to maintain an overall best view round his ship including the use of CCTV monitors.

He said: “Not everything can be seen at all times, that is an impossible task.”

He added: “He remained in the seat because he perceived it gave him the best view available. In my judgment, to move is likely to have hampered certain aspects of the lookout.”

District Judge Callaway concluded: “I am satisfied the defendant did keep a proper lookout and was not to blame for the collision.”

He said that Mr Drummond was considered by his employer to be an “experienced and safety-conscious” captain who had made 6,000 crossings to the Isle of Wight without incident.

District Judge Callaway said the skipper of the Phoenix, Mr Jackson, had accepted a caution for his part in the incident.

He said that Mr Jackson had “almost no knowledge” of Colregs (International Regulations for Preventing Collisions at Sea) and added: “No proper lookout was in evidence and which endangered himself, his crew and the Phoenix, and to a lesser extent, the ferry.”

He continued: “It’s likely that Mr Jackson simply did not see the oncoming ferry, irrespective of the Colregs. As a matter of common sense, this was another huge failing on the part of this skipper.”

Mr Drummond, of Sandringham Road, Southampton, was acquitted of failing to keep a lookout and misconduct of master likely to endanger ships, structures or individuals under the Merchant Shipping Act.

Speaking after the hearing, Mr Drummond said he had been dismissed from his job following the incident but was seeking for this to be reversed at an employment tribunal to be held next year.

He said: “I feel very relieved, as a Christmas present I couldn’t have asked for anything nicer.”