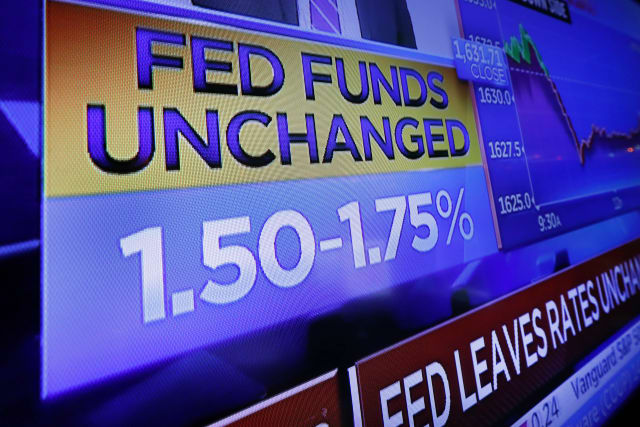 The US Federal Reserve left its benchmark interest rate alone and signalled that it expects to keep low rates unchanged through next year.

It reflects its view that the US economy has so far withstood the US-China trade war and a global slump and remains generally healthy.

Its benchmark rate, which influences many consumer and business loans, will remain in a low range of 1.5% to 1.75%.

In a sign of the Fed’s confidence about the economy, its latest policy statement dropped a phrase it had previously used that referred to “uncertainties” surrounding the economic outlook.

That suggests that the Fed may be less worried about the impact of the US-China trade war or overseas developments.

Financial markets moved slightly up soon after the Fed issued its statement.

The Fed may prefer to leave rates alone through 2020, an election year.

But many analysts note that the economy faces risks from the trade conflicts, a global slowdown and a potentially disruptive Brexit and say the Fed may feel compelled to cut rates at least once next year.

Persistently low inflation with very low unemployment has led many Fed officials to conclude that rates can remain lower for much longer than they thought without spurring higher prices.

Still, savers have struggled to find returns outside the stock market that can keep them ahead of inflation.

In updated forecasts that the Fed issued Wednesday, no Fed officials pencilled in a rate cut in 2020.

Instead, four officials said they expect a rate hike next year.

The remaining 13 officials projected no change to rates.