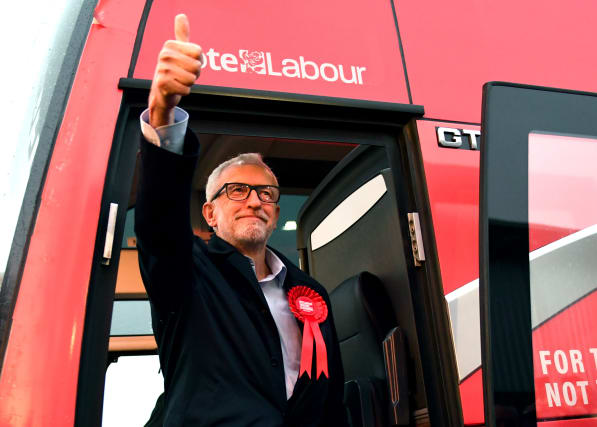 Jeremy Corbyn is to call for voters to “shock the establishment” and back “real change” in supporting Labour as he gives his final speech of the election.

The Labour leader will stress a “truly historic” choice for undecided voters as he makes his last push in London on Wednesday night to prevent the Tory majority predicted by the polls.

Mr Corbyn is to say the nation stands at a “fork in the road” between a “hopeful society” and Boris Johnson’s Tories who he accuses of planning to “open our NHS to takeover by American mega corporations” and enact further cuts.

The comments will come at a rally in London at the end of Mr Corbyn’s whirlwind tour of marginal seats from Glasgow to Bedford.

“We stand at a fork in the road. The choice facing you, the people of this country, tomorrow is truly historic,” he is expected to say.

“Boris Johnson won’t just keep everything the same, he will make it worse. He will open our NHS to takeover by American mega corporations and carry on with more cuts.

Mr Corbyn will say that he has been made “more determined” by years of “media attacks” which he describes as “relentless”.

“They are determined to stop real change. They won’t win, we will to create an inclusive and hopeful society,” he should say.

“Because tomorrow you can shock the establishment, by voting for hope.”

The gravest criticism levelled at Mr Corbyn during his leadership is that he has failed to sufficiently tackle anti-Semitism in the Labour ranks, something he has apologised for.

But he has also been accused of failing to come up with a clear Brexit plan. Labour has pledged to hold another referendum between a “credible” deal and Remain within six months.

A final constituency-by-constituency poll by YouGov predicted that the Tories’ lead over Labour had narrowed, but that the Conservatives are on course for a 28-seat majority.

But the pollsters warned this was within the margin of error and a hung parliament or a greater Tory victory are still possible.