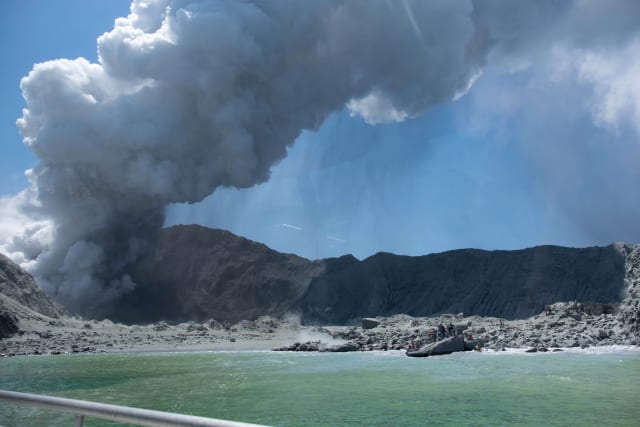 A sixth person has died after a volcanic eruption on White Island in New Zealand, police said.

Two British women are among around 30 people taken to hospital following the incident on Monday, many of which have suffered serious burns, while eight people are missing presumed dead.

Survivors described how tourists were forced to run into the sea to escape the clouds of thick black ash and scalding vapour.

New Zealand police confirmed officers are investigating the incident on behalf of the coroner but said it was too early to speculate on any potential criminal activity.

White Island, off the country’s North Island in the Bay of Plenty, erupted while dozens of people were exploring New Zealand’s most active volcano.

Relatives of those thought to be caught up in the disaster have registered their loved ones’ details on a missing persons list in an effort to ascertain their whereabouts.

Mark Rakos said he was growing increasingly concerned for the safety of his father Karl Rakos, 57, and stepmother Deb Rakos, 50, from Darlington in County Durham.

The 35-year-old told the PA news agency the pair are on a cruise around New Zealand but he had not heard from them since Sunday, despite repeated attempts to make contact.

He said: “The last time I spoke to my dad he was in Dunedin, that was a WhatsApp message on Sunday, but I’ve not heard from him since.

“They’ve been on the cruise for about a week, it was going around New Zealand then on to Australia.

“They were going to Sydney and then back home on December 18.

“I’ve been asking my grandmother (if she has heard from the couple) because he’s not been in touch and I’m starting to scare myself.

“People have said it would take two days for the cruise ship to get up to the volcano area, so that’s what I’m hoping for, but I don’t know what his plans were.

“I would have thought surely the cruise ship has WiFi. I thought he would have been able to answer by now.”

Other Britons feared missing have got in touch with concerned relatives.

Ian Evans said his brother Matthew Evans, 38, originally from Carmarthen in Wales, who was one of the Britons listed as missing, is safe and well.

Mr Evans told PA: “He was travelling with his new wife, he was trekking at the time and we were concerned because we hadn’t heard from him for 24 hours.

“But they are safe. They were in the North Island, away from the Bay of Plenty.

“They said they had no idea what had gone on.”