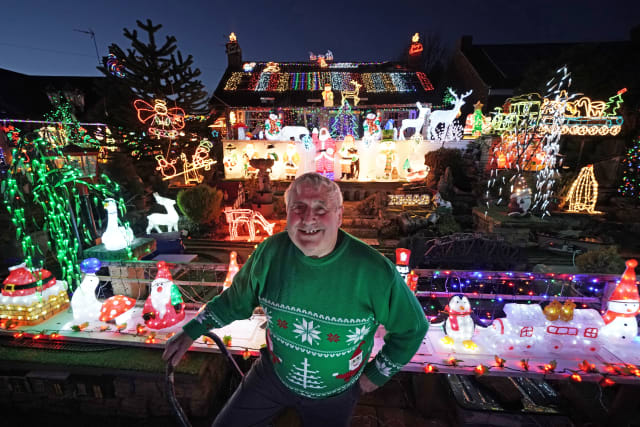 An 79-year-old man who climbs on to the roof of his house every year to put up a Christmas light display to raise money for his local church has said he will continue for as long as he can.

Eric Marshall, from Bagby, near Thirsk, North Yorkshire, has been putting up the display – which now includes hundreds of sets of lights – for around 30 years.

People from around the world come to see the stunning light show, which has even attracted the attention of Hollywood film-makers.

Mr Marshall, who turns 80 on Thursday, said the display takes him all of November to put up, ready to switch on on December 1.

He told the PA news agency: “I do everything by myself, I’m up there on the roof putting them up.

“I’ll keep doing it for as long as I can, everybody seems to enjoy what I am doing. I’ll go as long as I possibly can if my health holds out.

“My wife Jean keeps moaning at me that this will be the last year, but I don’t take any notice.”

Mr Marshall said the display had grown over the years from just one set of lights.

He said: “I set off with that Santa and a sleigh over there and all the children came to see, and then I got a few more and a few more and it’s grown to this, what you can see today.”

The pensioner said buses and taxis make special journeys to bring people to see his lights and, in 2010, he was visited by film-makers from Hollywood who included his display in a television documentary about Christmas lights across Europe.

Mr Marshall’s Christmas lights have helped to raise thousands of pounds for the Bagby Church Fund over the years.

He also raises money for Macmillan Cancer Support with a model railway in his garden during the summer.