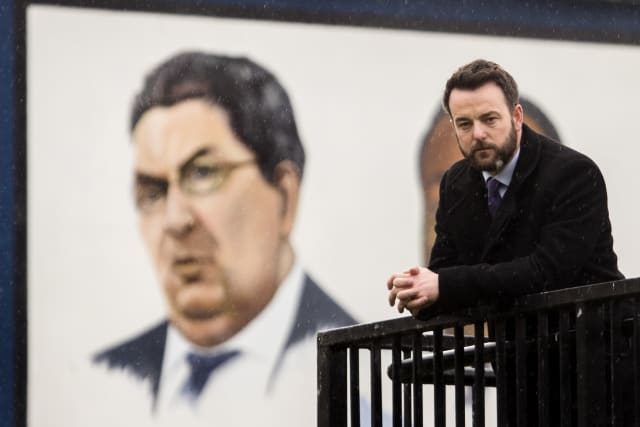 The SDLP leader would be a “passionate advocate” for Europe if he wins a Westminster seat, the wife of peace process founder John Hume said.

He won the Nobel Peace Prize for his role in talks which helped end decades of violence.

He is targeting his republican rivals’ policy of abstaining from Brexit votes.

Mrs Hume said: “John himself understood that after so much conflict, the European project that began as the common market of nations coming together, working to ‘spill their sweat and not their blood’ was a vision of brilliance.

“It was an utter inspiration for him on our path toward peace and later, it became an integral part of our solution in Ireland.

“We need another passionate advocate for Derry, for this island and for Europe.

“I’ve watched this campaign and I believe that Colum is that advocate.”

Sinn Fein argues that the British Government’s “chaotic” Brexit policy is shaped by English MPs and that taking its seats at Westminster would not make any real difference.

It believes its voice has been heard in Dublin and Brussels and contributed to the Irish Government and EU’s negotiating policy.

Its Foyle candidate Elisha McCallion has said this election is about bolstering the argument for Irish unity.

Mr Eastwood has stated that watching from the sidelines as Westminster decides Northern Ireland’s future outside the EU is untenable.

Mr Hume believed the key to Irish peace lay in persuading the IRA to give up arms, in the primacy of politics over the gun.

In 1988, he began a series of private discussions with then Sinn Fein leader Gerry Adams which formed one strand of dialogue which eventually led to the IRA’s ceasefire.

His wife said the SDLP leader would defend everything her husband had sought to build and protect in Londonderry and across Ireland.

She predicted he would fight for social justice and defend Northern Ireland’s place in the EU.

She added: “This Thursday’s election is one of the most important of this generation.

“Over the last two years we have watched as the crisis and chaos of Brexit has unfolded.

“Everything that we have worked for over so many difficult years here has been ignored, and the shared future we voted for has been threatened.

“Derry’s voice and Derry’s vote has been badly missed over those two years.

“This Thursday is our chance to put that right by sending Colum Eastwood to Westminster to speak and to vote on our behalf.”

Another member of the SDLP’s Civil Rights era old-guard, Brid Rodgers, said Mr Eastwood shared her generation’s commitment to principles like one man one vote.

In a reference to Sinn Fein, she said: “Standing on the green outside Westminster doesn’t cut it. We need someone in there.

“We weren’t battened off the street in 1968 for this empty formula.”