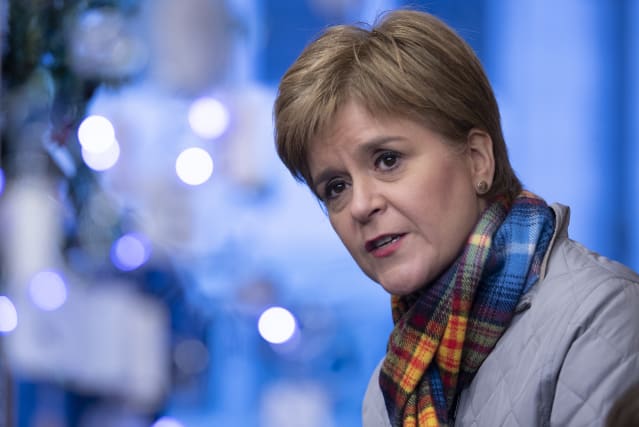 Nicola Sturgeon was forced to defend her plans to hold a second vote on Scottish independence in 2020 as the country’s political leaders clashed ahead of Thursday’s General Election.

The First Minister and SNP leader insisted the choice must be available to Scots “because Brexit is going to do real damage”.

She plans to hold a second referendum in the second half of next year – when the UK could be in a transition period as it leaves the European Union.

Pressed on why a second independence referendum should take place so soon after the 2014 vote – which was described at the time as a “once-in-a-lifetime” event – Ms Sturgeon said with the transition period under way it would be “important for Scotland to make that choice”.

She made the plea as the leaders of the four Scottish parties represented at Westminster clashed over Brexit and independence in a TV debate.

Asked by an audience member if Brexit would make a vote for independence “inevitable”, Mr Carlaw insisted: “I don’t necessarily believe there will be a second independence referendum, we promised it wouldn’t be for a generation, and so I don’t think it will be until a generation has passed that we should put ourselves and our country through that again.”

The Conservative hit out at his rival leaders for failing to accept the result of the 2016 Brexit referendum – although Scotland overwhelmingly voted to remain part of the European Union.

Mr Carlaw said: “My view is the most divisive thing you can do is to refuse to accept the outcome of the vote when you put it to the people, you can’t have disposable democracy.”

Ms Sturgeon insisted: “It’s not democracy if people are not allowed to change their minds when the circumstances change, and circumstances in Scotland have changed dramatically and significantly since the 2014 referendum.

“I do believe that people in Scotland when they get the choice again will vote to be independent, because the last few years have demonstrated to us the price we are paying for not being independent.

“A broken Westminster system has imposed austerity on Scotland against our will and of course is threatening to impose Brexit upon us. Our voice is being ignored, our votes are being disregarded.”

Liberal Democrat Mr Rennie said the experience of Brexit had put Scots off independence, saying: “People have seen how difficult Brexit is, how breaking up a union of 40 years, the turmoil, the division, the economic damage that has come with it. We shouldn’t mount chaos upon chaos.”

He called on Scots to unite with others across the UK to try to keep the UK in the European Union, urging them: “Let’s not give up on that battle.”

Mr Leonard, meanwhile, argued that a “redistributive” Labour government would challenge the belief that Scotland has been neglected by Westminster.

“We make our own history and there is no inevitability,” he said, adding: “It’s not how the UK Government, it’s how the Tory government has treated Scotland.”

Asked if another hung parliament would be a bad thing, Mr Carlaw said: “I think we’ve had nearly three years of a hung parliament and I think the consequence of that has been an inability to actually arrive at decisions to paralyse parliament and for the whole country to despair of politicians.”

Listing the powers devolved to the Scottish Parliament including in areas such as health and justice, Mr Carlaw added: “It’s those public services that are currently suffering because Nicola Sturgeon’s first, second, third and fourth priority is the constitution, not your jobs, not your health service, not your schools and not the Scottish economy.”

Ms Sturgeon, on the prospect of striking deals with Labour and the Lib Dems to keep the Tories out of Downing Street, said: “I’d certainly want to, but unfortunately the last time there was a hung parliament the Lib Dems decided to put the Conservatives into government and I’d hope that wouldn’t happen this time.”

She added that the SNP being able to exert influence in the event of no party getting majority “is a much better position to be in than the one we’ve had for the past few years”.