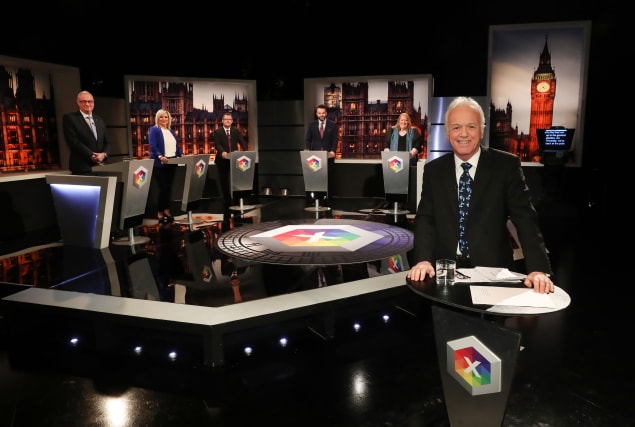 Senior figures from Northern Ireland’s political parties have clashed over Brexit and representation at Westminster just days before voters are due to go to the polls.

Although billed as a leaders’ debate, DUP Lagan Valley candidate Jeffrey Donaldson appeared on the BBC NI show on Tuesday evening instead of his party leader Arlene Foster.

The first question put to the five politicians by a member of the audience was: “Do you believe Brexit makes a united Ireland more likely?”.

Mr Eastwood said he believes the first thing to be dealt with is “the emergency that is Brexit”, and called for a second referendum to “stop this Brexit madness”.

“My message to unionists is to send a strong unionist team back to Westminster, that’s what unionists want,” he said, emphasising that his party has been “crucial on Brexit”.

Ms O’Neill responded saying Brexit may make people rethink their stance on a united Ireland, if leaving the UK would mean re-entering the EU.

Mr Aiken said Mr Johnson’s deal makes Northern Ireland “a place apart”, and called for the proposals to be stopped.

Several of the leaders rounded on Ms O’Neill over Sinn Fein’s policy of not taking their seats at Westminster.

She insisted “one or two Irish MPs won’t make a difference”, in response to criticism by Mr Eastwood and Mr Aiken.

Mr Aiken put to Ms O’Neill that her MPs in the last parliament were often seen sitting in coffee shops and questioned, “why not take your seats on the green benches”?

“You are pretending you can go to Westminster and stop Brexit, that is nonsense,” Ms O’Neill replied.

The SDLP leader, who is running in Foyle, restated that if elected he will take his seat in Westminster.

Ms O’Neill responded saying her MPs will never take an oath of allegiance to the Queen.

At the last General Election in 2017, Northern Ireland returned 10 DUP MPs, seven from Sinn Fein and one independent, Lady Sylvia Hermon, who is not standing again.

This year, the smaller parties are hoping to break through with close races expected in a number of constituencies.