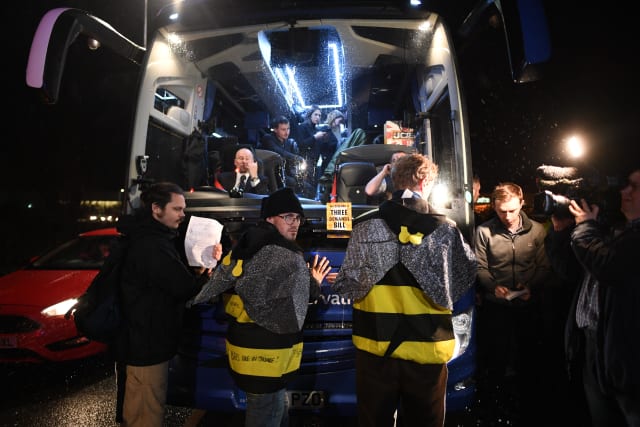 Climate change activists have glued themselves to the Conservative campaign bus, warning the party’s green targets amount to a “death sentence” for everyone.

Extinction Rebellion protesters, some dressed as bees, walked towards the bus in the road as it left a visit to JCB in Uttoxeter.

The bus was forced to slow to a stop and three of the protesters stuck their hands to the bus.

Prime Minister Boris Johnson was not on board and police attended the scene.

One activist, who identified himself as James, told the PA news agency: “We’re from Extinction Rebellion.

“The Conservatives have failed for the duration of the entire General Election campaign, with only two days to go, to raise the prospect of the climate and ecological crisis which is facing humanity and all life on this planet.

“It’s going to severely impact our society and generations of British people to come, and people around the planet.

“The Conservatives have a decarbonisation target of 2050, which is quite frankly a death sentence for everybody.”