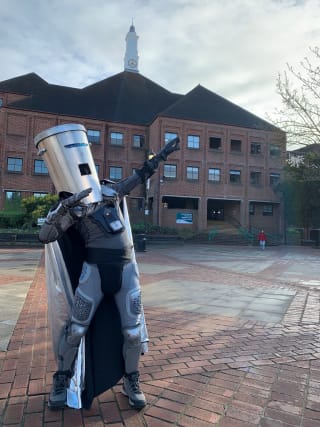 The man who ran as Lord Buckethead in the last general election has predicted Boris Johnson may endure a similar fate to Theresa May this week.

Comedian Jon Harvey stood as Lord Buckethead in Mrs May’s Maidenhead constituency in 2017, and this year is running as Count Binface against the Prime Minister in Uxbridge and South Ruislip.

“I think their fatal flaw is their hubris,” the independent candidate said of the Conservative Party.

“Theresa May called a general election (in 2017). She did not need to do so and it was her comeuppance.

“I believe Mr Johnson is going for that First World War strategy of ‘one more push’,” he told the PA news agency.

“He thinks that the Labour Party under (Jeremy) Corbyn remains terminally weak, and, before they get a younger and slightly more media-savvy leader, he thought ‘I’ll go for them now’.

“He may yet discover that it’s not as easy as that.”

Mr Harvey cited “an unpleasant battle on the planet Copyright” as the reason behind the switch from Lord Buckethead to Count Binface.

Instead, a different person will don the Lord Buckethead costume in the General Election on Thursday, doing so in the same constituency as Count Binface and Mr Johnson.

However, despite going from bucket to bin, Mr Harvey’s character remains much the same as it was two-and-a-half years ago, running on a manifesto of bringing back Ceefax and offering “a people’s vote about a people’s vote”.

Count Binface has been critical of the Prime Minister on a number of issues, including “his get-Brexit-oven-ready-microwave nonsense,” but he did promise to treat the Tory leader with respect should he meet him on Thursday.

“Should our paths cross, I will be polite and treat him with the decorum that every politician deserves,” he said. “Maybe we could have a lovely chat about Latin and Greek.”

But while Count Binface promised decorum on election day, he made his feelings clear about the choice the country appears to be faced with.

“Correct me if I’m wrong but I fail to see a more ludicrous pair of potential heads of government than those two (Johnson and Jeremy Corbyn),” he said.

“They’re a pair of bantamweights. I’m the Anthony Joshua, going back in after an unfortunate incident – slug it out for 12 rounds and come out on top!”