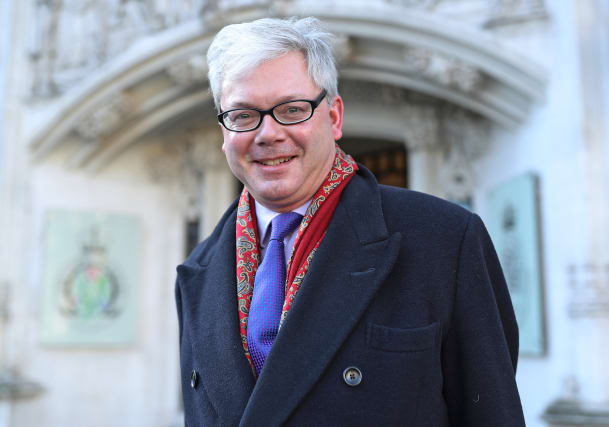 An aristocrat and his estranged wife are waiting for Supreme Court justices to rule on a Scotland versus England legal fight which has been running for several years.

Charles Villiers and Emma Villiers, who lived near Dumbarton and separated after 18 years of marriage, are divorcing in Scotland.

But they disagree about whether arguments over money should be heard in an English or Scottish court – and have been embroiled in litigation for more than four years.

Mr Villiers, 56, says that, because divorce proceedings are taking place in Scotland, any fight over money should also be staged in Scotland.

His estranged wife, who now lives in England, disagrees.

Five Supreme Court justices, including Supreme Court president Lady Hale, finished analysing the latest round of the dispute on Tuesday.

They heard arguments from lawyers representing Mr and Mrs Villiers and the Ministry of Justice at a hearing in the Supreme Court in London which began on Monday, and are expected to deliver a ruling next year.

Legal experts say Supreme Court justices have been asked to grapple with issues relating to “forum shopping” and “divorce tourism” – and that the case could have implications.

Mr Villiers asked Supreme Court justices to analyse the case after losing fights in the High Court and Court of Appeal in London.

A judge based in the Family Division of the High Court in London began considering the dispute in 2015,.

Mrs Justice Parker said any fight over the division of assets should take place in England.

In 2018, three Court of Appeal judges in London upheld that decision and dismissed an appeal by Mr Villiers.

Appeal judges said divorce proceedings in Scotland and a money fight in England were not “related actions”.

Mr and Mrs Villiers are listed on the website www.thepeerage.com.

The website provides a “genealogical survey” of the peerage in Britain.

Lawyers representing Mr Villiers say he is a relative of the Duchess of Cornwall.

Lawyer Russell Bywater, who represents Mr Villiers and is based at law firm Dawson Cornwell, says the case pits the English and Scottish jurisdictions’ “different approaches to spousal maintenance” against each other.

“In Scotland, the rule of thumb is that a former spouse receives alimony for three years post-divorce, whereas in England it could be until one of the former spouses dies,” he said outside court.

“The Supreme Court is being asked to bring clarity to what is otherwise an anomaly between intra-UK jurisdictions.”

He said if Mr Villiers lost, Scottish divorcees might make money claims in England in the hope of getting bigger payouts.

A spokeswoman for London law firm Vardags, whose lawyers specialise in family court litigation, said the outcome of the case might trigger changes in legislation.

“Despite the closeness of Scotland and England geographically, the two countries adopt very different approaches when it comes to the issue of financial maintenance following divorce,” said the spokeswoman.

“In England, lifetime maintenance is not unusual, whereas in Scotland a ‘clean break’ is strongly encouraged and so maintenance awards exceeding three years are quite rare.

“This case concerns the issue of ‘forum shopping’, which essentially means parties deciding which country is more likely to provide them with a favourable financial settlement on divorce and thereby selecting that country to pursue their financial claim.”

She added: “Ministers have a strong interest in the outcome and may well consider legislating to bring English maintenance law in line with the more restrictive ‘clean break’ approach in Scotland.”