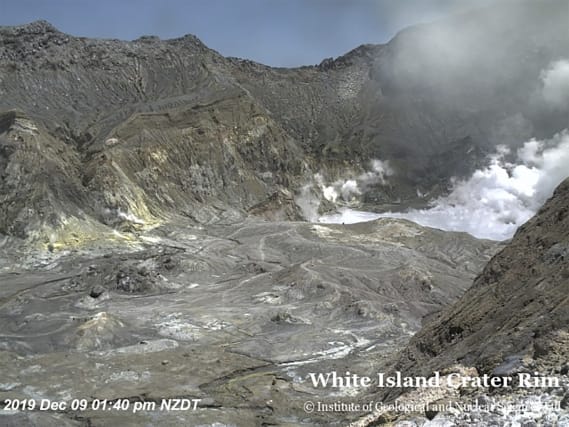 Five people have been killed and many more are unaccounted for following the tourist attraction’s latest eruption, which sent huge plumes of smoke and ash into the air.

The threat level was raised last month following an increase in activity – meaning eruptions are more likely than normal and can happen with little or no warning.

– Where is White Island?

The uninhabited and privately owned volcanic island sits about 50 kilometres offshore from the mainland in the Bay of Plenty, on the northern coast of New Zealand’s North Island.

Also known by the Maori name Whakaari, the volcanic island has been built up by continuous volcanic activity over the past 150,000 years.

About 70% of the volcano is underwater, making the volcanic structure the largest in New Zealand according to GeoNet, which monitors geological hazards in the area.

Sulphur mining, which began in 1885, stopped in 1914 after a crater wall collapsed and a landslide destroyed the mine and village, killing twelve people.

– When were the previous eruptions?

The country’s most active cone volcano has erupted several times before, most recently in 2016 and during the 2012/2013 period.

An explosion occurred on August 5 2012 with a period of ash emissions, according to GeoNet.

Steam and sulphur explosions followed in February and April 2013.

In April 2016, a short-lived eruption occurred and formed a new depression in the crater complex. Later that year, ash was emitted from a vent.

GeoNet raised the Volcanic Alert Level to Level 2 in November of this year following an increase in background activity.

Michael Rosenberg, Duty Volcanologist, said at the time that signals were similar to the 2011-2016 period and that eruptive activity was more likely than normal and could happen with little or no warning.

– How is the volcano monitored?

GeoNet says they frequently visit the island to collect gas and water samples and to make general observations.

The volcano expert said: “Volcanoes such as the one on White Island are monitored by 24/7 by live cameras and several seismometers, which register all seismic activities.

“Volcanoes trigger numerous small earthquakes, and these small tremors can give us a view of what is happening.

“The signs seem to have been missed on this occasion though, causing five deaths.”