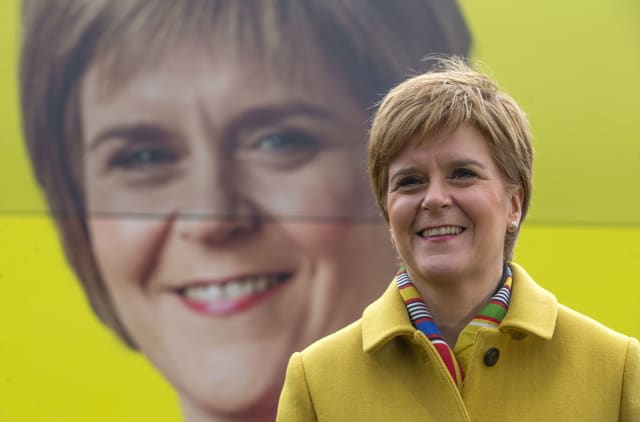 Nicola Sturgeon has suggested that a referendum on Brexit would be held before a second vote on Scottish independence.

Scotland’s First Minister said that Labour’s intention to hold an EU poll within six months of being elected – with a choice between Remain and a deal negotiated by Jeremy Corbyn – would indicate that a Brexit vote would be first on the ballot.

Ms Sturgeon reiterated her view that another Scottish referendum should be held towards the end of 2020.

Speaking on the BBC’s Good Morning Scotland programme, the First Minister said: “It looks as if the EU one (referendum) would come first and then an independence referendum towards the end of next year. That’s the sequencing.

“In terms of the priority, in order of importance if you like, I want the whole UK to get the opportunity to escape Brexit, but of course an EU referendum doesn’t guarantee that Scotland escapes Brexit, we could have the same result we had in 2016.

“And whether it’s Brexit or stopping any other Westminster policy being imposed on Scotland, the way to do that is to become independent and that’s why that choice over the future of our country is so important.”

Ms Sturgeon added: “This election won’t decide independence, but it does help to determine whether Boris Johnson decides our future or the people of Scotland do so.”

Asked whether a vote to remain in the EU could effectively wipe out the “material change in circumstances” for another Scottish independence vote, Ms Sturgeon said: “I don’t accept that because the material change is, yes, the prospect of Scotland being taken out of the EU, but also the contemptuous way which Scotland has been treated with our interests, our voice, our views, completely ignored.”

The First Minister continued: “I’m being very clear in this election, I think it’s right for Scotland to have a choice over our own future, whatever that choice happens to be and it’s up to people in Scotland to decide whether that’s independence or not, it’s not up to me.

Ms Sturgeon also said she did not believe that it could be the case that a second independence referendum could be held on the same day as a vote on Brexit.

The SNP leader said: “I don’t necessarily, no, but obviously there’ll be discussions if we’re in this situation about all of that, but let me be very clear here, if we are to be in this situation come Friday, and the days and weeks that follow Friday, we’ve first got to make sure that on Thursday, we vote in a way that means Boris Johnson doesn’t have a majority.”

Ms Sturgeon also said that she would make a Section 30 request – which would transfer power from Westminster to the Scottish Parliament to allow for a referendum to be held – before the end of the year.

The First Minister said she had been “crystal clear” over the legality of a second vote, having rejected suggestions that Scotland could become independent even if a Section 30 request is knocked back.

Ms Sturgeon said: “On the issue of the legality of a second referendum, I’ve been crystal clear here, and sometimes this is a hard thing for my own supporters to hear, a referendum if it is to be capable of delivering independence for Scotland, has to be legal, it has to be accepted in terms of its legitimacy and I’ve never shied away from that.”