PM criticised by Sturgeon over comments on EU migrants 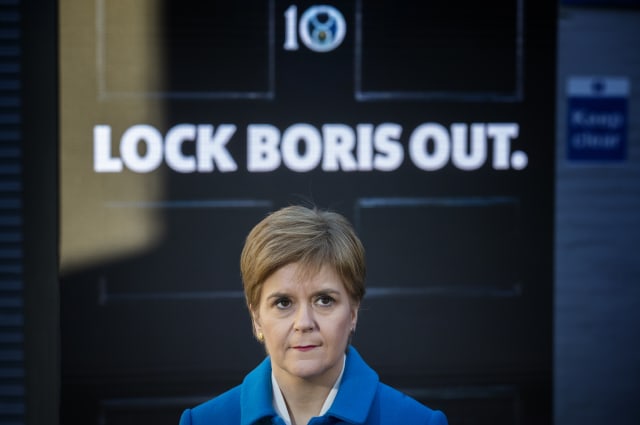 Nicola Sturgeon has said it is “despicable” for Boris Johnson to be “indulging in anti-immigration rhetoric”.

Scotland’s First Minister criticised the PM after he said EU migrants have been able to “treat the UK as if it’s part of their own country” for too long.

Speaking to the PA News agency during a campaign trip to Coatbridge, North Lanarkshire, on Monday, Ms Sturgeon said migrants should be welcomed to Scotland and the UK as a whole.

“I think Boris Johnson’s dog-whistle comments on migration are just one of many examples why we don’t want him, and shouldn’t want him, to be Prime Minister,” she said.

“My view is that, in principle, if somebody comes to Scotland to make it their home and make a contribution here, they should be welcomed.

“And they should be able to treat Scotland as their country and their home because that is what it is and that’s the kind of open, inclusive, tolerant Scotland I want to see, not just now but in the future.”

She added: “There’s also a much more hard-headed argument here.

“We know from our own population projections that Scotland has to be able to attract people from other countries if we are to keep our working age population growing, contributing the tax revenues that then allow us to support our NHS and other public services.

“So this is a really important issue and I think it is really despicable that we’ve got Boris Johnson indulging in this anti-immigration rhetoric.”

The First Minister also warned against the prospect of a sell-off of the NHS under a Conservative Government, as well as the stripping back of environmental and worker rights.

“I think people should think about the kind of country we want to wake up to on Friday morning,” she said.

“We have the opportunity in Scotland to help deprive Boris Johnson of a majority.

“We can do that by voting SNP in all of the Tory-held seats in Scotland where the SNP is the main challenger.”

She added: “If we want a better future than the one that Boris Johnson offers for us – ripped out of the EU against our will, the diminution of workers’ rights and environmental protections, our NHS potentially being on the table in a trade deal with Donald Trump – then people have to come out and vote for that better future.”

The First Minister did not confirm whether she will make a Section 30 request next week to hold a Scottish independence referendum next year but outlined her intention to do so by the end of 2019.

Ms Sturgeon said: “I’ve said before the end of the year and the year is running out but I think everybody in Scotland should be focused right now on the election on Thursday because this election is probably the most important in any of our lifetimes.

“Boris Johnson has shown himself, in his short time as Prime Minister and in this campaign, to be untrustworthy, he’s evading scrutiny as much as he possibly can and we know that his vision for the country is not the vision that is shared by, in my view, the majority of people in Scotland.

“So if we don’t want to be facing that prospect, we’ve got to make sure that on Thursday, we vote to stop it.”