On the campaign trail on Tuesday 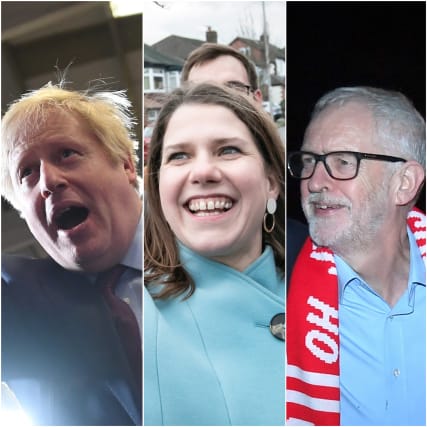 With just two days to go on the campaign trail before election day on Thursday, party leaders are stepping up their efforts to earn much-needed votes.

Labour leader Jeremy Corbyn will have a very busy day on Tuesday canvassing north-west England and then Scotland while Boris Johnson will also be out and about.

The Lib Dems, Brexit Party and Greens also have campaign events with all the parties knowing false moves now could prove fatal to their chances of winning as many seats as possible.

Prime Minister Boris Johnson will start his day in the Midlands with a press conference before travelling up to north-west England in the evening.

The Tory leader is expected to head to Manchester for a rally on Tuesday night, via a stop in North Wales to visit businesses.

Jeremy Corbyn has a similarly busy day on the campaign trail, kicking things off in north-west England at a library before visiting a primary school and a pub in the region.

He will then go north of the border to Glasgow where he will join activists in making calls to supporters and prospective voters.

Leader Jo Swinson is heading the in the opposite direction, spending Tuesday in the south-west and attending a rally in Somerset.

She will also go canvassing in the area and will be talking to voters about issues including Brexit and the NHS.

Nigel Farage will remain in London on Tuesday where he is expected to hold a Brexit Party press conference after a tumultuous few days that has seen some of his MEP’s defect to the Conservatives.

The Green Party are also staying in London, where they will host an even to reveal their policies to help students with economic issues.