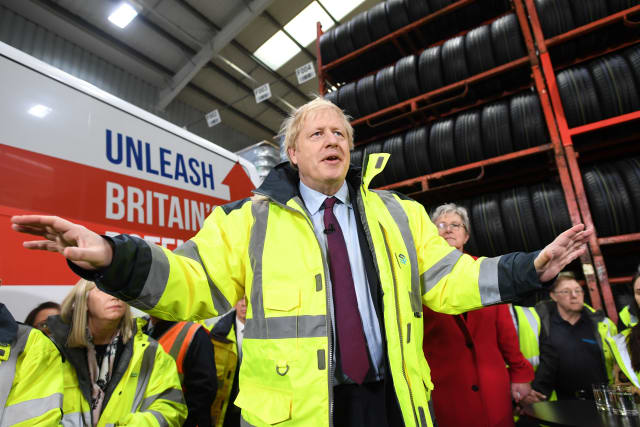 Boris Johnson will try to rally Tory supporters after coming under fire for his apparent lack of empathy for a four-year-old boy left sleeping on a hospital floor because there was no bed available.

With two days to polling day, the Prime Minister will warn there is a “clear and present” danger of another hung parliament unless voters back the Conservatives on Thursday.

On the General Election campaign trail in Staffordshire, he will say the opposition parties need to gain just 12 seats to put Jeremy Corbyn in Downing Street.

Tory strategists will hope their prospects of securing an overall majority have not been dented by the row which blew up over the treatment of Jack Williment-Barr at Leeds General Infirmary.

A photograph widely circulated on social media showed the boy lying on a pile of coats to keep warm while he waited for a bed for treatment for suspected pneumonia.

Questioned by ITV News, Mr Johnson initially refused to look at the photo on the reporter’s phone before taking the phone and putting it in his pocket.

Health Secretary Matt Hancock was dispatched to the hospital in an attempt to defuse the growing media firestorm.

However his appearance prompted further recriminations following claims his aide had been punched by a Labour Party activist.

Labour accused the Tories of “bare-faced lying” after video footage of the incident posted online showed only the arm of a protester accidentally brushing against the aide’s face.

Meanwhile The Daily Mirror, which published the original photograph, carried a fresh picture of a nine-month-old baby girl who was forced to wait on a chair for six hours at the Countess of Chester Hospital near Ellesmere Port because there was no bed available.

In an election campaign largely devoid of significant slip-ups, it will heighten concern among Conservatives that they remain vulnerable in the face of concerted tactical voting by opponents of Brexit.

The opinion polls have consistently shown the Tories on course for an overall majority, but senior figures – including Mr Johnson’s chief adviser Dominic Cummings – have warned the race is much tighter.

A leaked memo from Tory pollster Michael Brooks to campaign director Isaac Levido seen by The Daily Telegraph said the “major risk” for the party was “the belief that the Conservatives are indeed on course to win a comfortable majority”.

At the same time the Remain United campaign – which opposes Brexit – said polling it had commissioned from Savanta ComRes showed the Tory lead was down to 7%, which it projected would give them a majority of just two in the new parliament.

The Prime Minister is expected to say on Tuesday that while the Conservatives need just nine more seats to secure a majority, they face “sophisticated and well-financed” efforts to thwart them.

“The danger of another hung parliament is clear and present. There are sophisticated and well-financed attempts under way to prevent a Conservative majority through tactical voting,” he will say.

“Jeremy Corbyn and his Lib Dem, nationalist and Green allies need only 12 more seats than last time to make Jeremy Corbyn prime minister and continue the chaos of a hung parliament.

“A vote for any of these parties is a vote for further indecision and two more referendums, on Brexit and Scottish independence.

“We’ll be stuck in this limbo, this first circle of hell, for the foreseeable future.”

The Labour leader, meanwhile, said he was feeling  “very happy, very confident” going into the final days of the campaign.

“We’ve got the message out, and we will continue to make sure it gets out over these last few days,” he told The Guardian.

Labour was returning to the offensive on the NHS, warning that under-funding was putting patients at risk.

The party said an analysis it had conducted of more than 120 NHS trust board papers had identified hundreds of risks to patient safety classed as “catastrophic” or “extreme”.