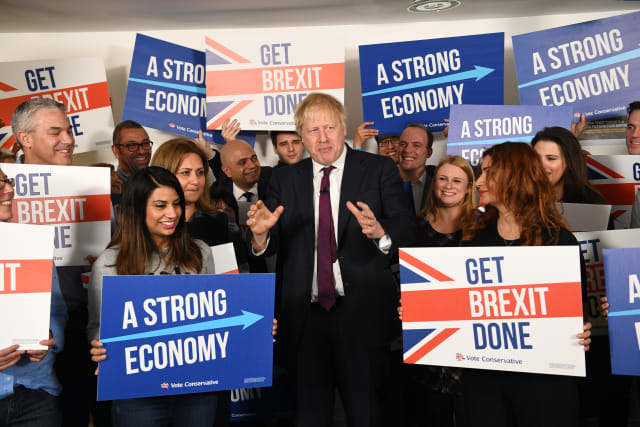 Boris Johnson will warn there is a “clear and present” danger of another hung parliament if voters do not turn out to support the Conservatives on Thursday.

With just two days to polling day, the Prime Minister will tell supporters that there are “well-financed” efforts to prevent a Tory majority through tactical voting.

During a campaign visit to Staffordshire on Tuesday, he will say that just 12 gains by the opposition parties would be enough to put Jeremy Corbyn in Downing Street.

“The danger of another hung parliament is clear and present. There are sophisticated and well-financed attempts underway to prevent a Conservative majority through tactical voting,” he will say.

“Jeremy Corbyn and his Lib Dem, nationalist and Green allies need only 12 more seats than last time to make Jeremy Corbyn prime minister and continue the chaos of a hung parliament.

“A vote for any of these parties is a vote for further indecision and two more referendums, on Brexit and Scottish independence. We’ll be stuck in this limbo, this first circle of hell, for the foreseeable future.

“On the other hand, the Conservatives need only nine more seats for a majority. We could finally get Brexit done, end the uncertainty and move on.”

The opinion polls have consistently shown the Conservatives ahead of Labour, but leading Tory figures – including Mr Johnson’s chief adviser Dominic Cummings – have warned the race is much tighter.

The Lib Dems have insisted they said they would not put Mr Corbyn in No 10 while Labour have said that in the event of a hung parliament they would seek to form a minority government rather than enter into any formal pacts or coalition’s with other parties.