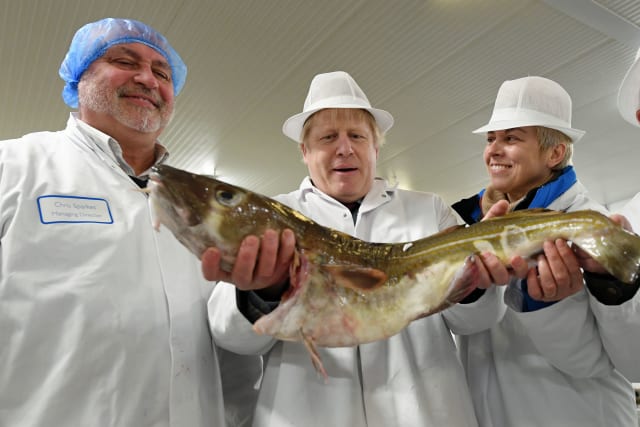 Boris Johnson has insisted he is “taking nothing for granted” as he launched his final election campaign push in a fish market.

The Conservative Party leader arrived in Grimsby for an early morning market tour and was greeted with cheers and some jokey shouts – along with the smell of fish.

One worker shouted “Boo Boris” while another man could be heard saying: “He brings them out, eh? Phoney bastards.”

Mr Johnson posed for selfies and watched a fish auction as cod and haddock were sold.

He was given the task of placing labels on sold items.

Chatting to workers in the market, Mr Johnson asked: “Are you worried about the Dutch super trawlers?”

He referred to it as a “mega trawler” and also said: “It was sort of hoovering everything up from the sea then.

“How can they check which fish they’re getting? They’re just going to take everything on, clean out the seabed, that’s the problem.”

“Ask the Dutch,” came the reply.

The Prime Minister later held a cod in his arms for the cameras.

Mr Johnson also pulled a box of fish across the warehouse floor, prompting shouts of “Go on Boris” from onlookers.

Speaking to broadcasters, Mr Johnson was asked how confident he was he could scale the “red wall” of Labour as he bids to secure a parliamentary majority – something the polls suggest he is on course to achieve.

He replied: “We’re taking nothing for granted, we’re working very, very hard across the whole country and I think it’s a message of unity of bringing this amazing United Kingdom together.

“If we can get Brexit done then we can move forward with investments in infrastructure, education and technology that will unleash opportunity across the whole country.

Mr Johnson is due to visit Sunderland as part of Monday’s campaigning.