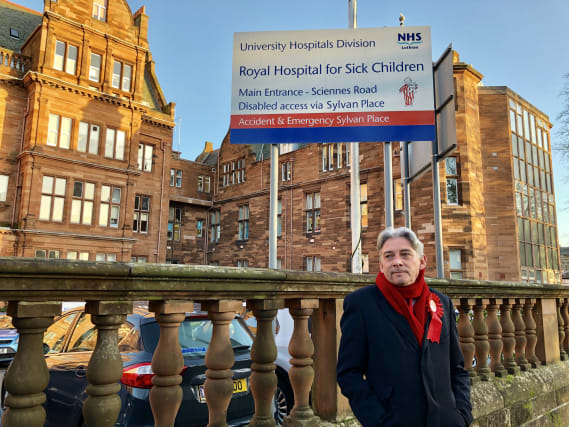 Pushing a message of investment in public services and the NHS, Mr Leonard asked people to consider whether they wanted five more years of austerity with the Conservatives or cash to “expand” the health service with Labour.

He argued the Tories are pursuing a hard Brexit while the SNP are focused on securing another independence referendum.

Mr Leonard told the PA news agency: “We are the only party which is putting forward a democratic solution to the chaos of Brexit.”

He added Labour would offer the public ”the final say” within six months.

Speaking outside Edinburgh’s Royal Hospital for Sick Children, he suggested  Labour’s investment in the Scottish health service – part of £100 billion of additional spending north of the border – would help to improve doctor recruitment across Scotland.

Mr Leonard said: “We will invest an additional £2 billion a year in the National Health Service in Scotland and that will lead to a significant increase in support so we can fill those GP vacancies – the consultant vacancies which are across Scotland will be filled.

“It means that we can start to look at what we can do to expand the National Health Service instead of it being constantly under pressure.”

With just four days to go until polling day, Mr Leonard said he would be urging voters to think about who they want in Government for the next five years.

He said: “We’ve had a really good response on the doorsteps, we are getting across our message that this election isn’t just about Brexit and it’s certainly not a referendum on a referendum on independence – it’s who’s going to be the Government for the next five years.

“In the end, the choice that people have to make is do they want a Tory Government re-elected for five more years of austerity, a squeeze on living standards and a rolling back of investment in public services, or do they want a Labour Government that will invest in the National Health Service, start to build houses again, turn back austerity and start to rebuild our economy.

“So that’s the choice that people will face on Thursday when they go into those polling stations.”

The Scottish Labour leader also told PA the SNP’s demands for another independence referendum would not form the basis of an agreement between the parties if the Tories were denied a majority.

Having previously said he believes a Labour Government would “diminish” the public’s appetite for Scottish independence, Mr Leonard reiterated his party’s stance that “we will not enter into any pacts, any coalition deals or any other arrangements with other political parties”.

“If we don’t get a majority – if we are a minority Government – we will put our policy programme into the Queen’s Speech and it will be up to other parties as to whether they vote for it or not,” he said.

He said on Sunday Politics Scotland that his party would not “stand in the way” of a second referendum if pro-independence-parties win a majority in the 2021 Holyrood election.