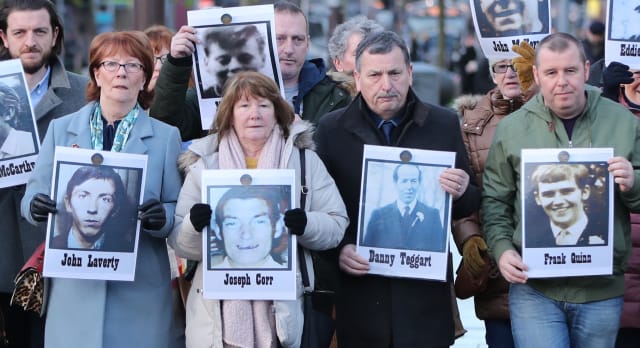 An 11th hour plea has been made for soldiers who fired shots at Ballymurphy to come forward, an inquest has heard.

Counsel for the Ministry of Defence (MoD) in turn challenged the Provisional IRA to come forward and explain its movements in the area at the time.

Ten people, including a priest and a mother of eight, were killed in disputed circumstances over the course of three days between August 9-August 11, 1971.

The shootings came during a chaotic time after the introduction of the controversial policy of internment without trial by the then Stormont administration sparked rioting across Northern Ireland.

Fresh inquests have been taking place into the deaths at Belfast Coroner’s Court over the last 13 months.

Lawyers for the families of the 10 victims have described to proceedings before Presiding Coroner Mrs Justice Keegan how each were innocent and unarmed.

They contend that they were all killed “unjustifiably” by soldiers and urged that in the findings, allegations they had been armed or attacking soldiers are refuted and their names are cleared.

Counsel for the MoD have insisted soldiers were returning fire during the incidents at five different locations across the three days.

The Parachute Regiment had been based at Vere Foster school and Henry Taggart hall in the Ballymurphy area at the time.

A large number of former soldiers have given evidence to the long running inquests, however only one has said he opened fire.

Claims were also heard that the IRA and loyalist gunmen were active in the area at the time.

A UVF interlocutor was appointed for the inquests, but did not give evidence.

During closing submissions at Belfast Coroner’s Court on Monday, Michael Mansfield QC urged any surviving former soldiers who opened fire to examine their conscience and come forward, adding: “It is not too late to tell the truth”.

Meanwhile Peter Coll QC for the MoD, challenged the IRA to explain its actions.

“No member of that organisation has come forward to give evidence,” he said.

“IRA volunteers were responsible for firing on Henry Taggart hall … their attack provides the context.”

The killing of the 10 were examined in five separate incidents.

Mr Coll on behalf of the MoD expressed “sincere condolences” to the families.

Making final submissions for incident two relating to the deaths of Mr Phillips and Mr Teggart who were among four shot close to the Henry Taggart hall, Mr Mansfield urged any former soldiers who fired shots to come forward.

He said the “real pain is that still being felt is the failure by those responsible for the killings to admit either then or now the enormity of what they did”.

“It’s still not too late … for those who were actually responsible for the pulling of the trigger – they can’t all be dead – … to tell the truth,” he said.

“We would ask even at this 11th hour the examining of a conscience if one is prepared to do it.”

Mrs Justice Keegan is set to make findings at a later date.