Boris Johnson quizzed by voter on Tories’ use of attack website 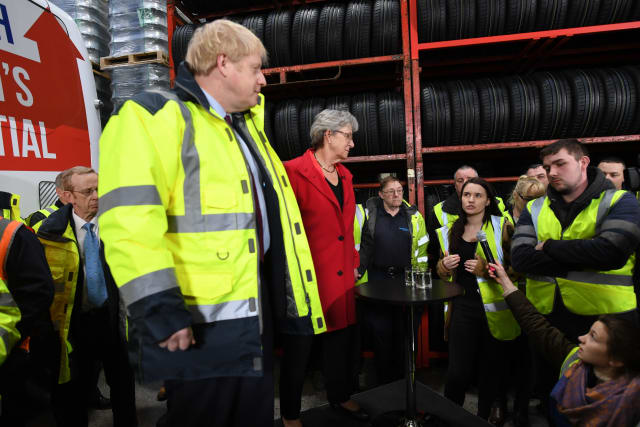 A voter challenged Prime Minister Boris Johnson over the Tories’ use of an attack website to make it harder for people to find the Labour manifesto on Google.

Company administrator Paige Hood, 25, quizzed him during a question-and-answer session with employees at Ferguson’s Transport in Washington, Tyne and Wear.

The mother, who plans to vote Labour and whose one-year-old son has needed NHS hospital treatment, asked Mr Johnson why the Conservative Party needed to set up fake websites and why it paid Google to put their own sites higher than Labour’s when people searched for his rival’s manifesto.

The Prime Minister said: “The short answer is I haven’t the foggiest idea.”

Mr Johnson then highlighted his own party’s manifesto but was challenged further.

He claimed in reply: “A lot of this is, basically, kind of a media diversion.

“What the public really wants to know about is what our plans are, we get Brexit done and move this country forward.”

When it was pointed out that the questioner was a member of the public, Mr Johnson also said: “I’m very sorry you can’t find that online but I’m sure it’s there somewhere.”

He added: “I think the more people are aware of what Labour’s plans are the better, because I think they would be economically ruinous to this country.”

Ms Hood explained afterwards why she asked the question, saying: “I felt like people should get to have that answer, people may not be aware of the fact that happened.

“It’s frustrating (for) anyone looking for the truth, or Labour’s manifesto.

“Surely if they have nothing to be scared of they would leave it for people to find.”

Asked if she believed Mr Johnson’s answer about not knowing what had gone on, she replied: “It’s either that he doesn’t know – and surely he should know what’s going on in his own Government – or he knew about it and he lied again.”