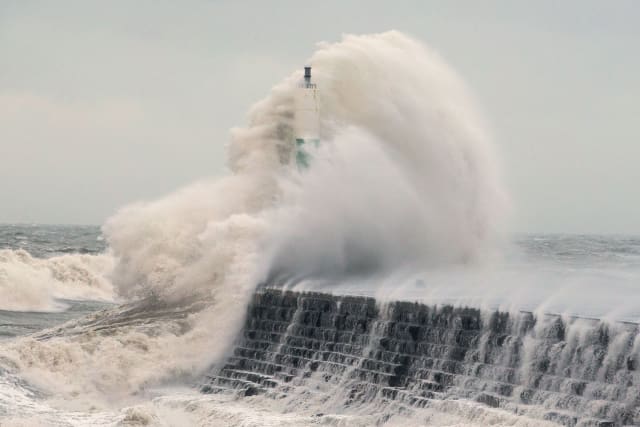 Strong winds from Storm Atiyah are expected to worsen overnight after it brought gusts of 70mph to parts of the UK this weekend.

Gales could exceed 75mph in the hours between Sunday night and Monday morning as the storm sweeps in from Ireland where it disrupted transport and power networks.

A yellow weather alert from the Met Office warned of very strong winds striking west Wales and south-west England from 6pm on Sunday until 9am on Monday.

Wind speeds of 78mph were recorded at Sherkin Island and Roches Point on the south coast of Ireland on Sunday, while the Isles of Scilly saw gusts of 71mph.

On the UK mainland the wind hit 70mph at Culdrose in Cornwall in the hour leading up to 9pm.

Met Office meteorologist Alex Burkill said on Sunday night: “The winds across particularly the south west will strengthen further so we will be seeing some gusts in excess of 75mph overnight.

“Widely across the UK I’m seeing gusts, pretty much from top to tail, of 30 to 40mph.

“The strong winds are pretty widespread. It’s very windy in the west and south west so that’s where we’re going to see the greatest impact unfortunately.”

Sea fronts in coastal communities could be affected by spray and large waves, the Met Office said.

It warned that some delays to road, rail, air and ferry transport were likely as well as the short term loss of power being possible.

In the South West, Coastsafe, a partnership campaign aiming to improve coastline safety, urged people to be wary of tidal surges and debris being thrown over sea walls during the storm.

South Wales Police advised drivers to slow down and be prepared for stronger winds when passing high-sided vehicles.

Network Rail imposed speed restrictions on CrossCountry and Great Western Railway services between Taunton in Somerset and Penzance in Cornwall on Sunday night.

In Ireland, forecasters at Met Eireann earlier issued a status red weather warning of gusts in excess of 130km/h (80mph) that was due to expire at 7pm.

A spokeswoman for ESB networks said engineers had to restore power to thousands of homes in Kerry cut off by the storm on Sunday.

At Cork Airport, a number of Aer Lingus regional flights were cancelled, while trains connecting the city to Mallow, Cobh and Midleton were operating at reduced speeds as a precaution.

Mr Burkill said the worst of the winds from Atiyah, the first named storm of the season, are expected to abate by Monday afternoon, with conditions remaining blustery.

Further unsettled, wet and windy weather is forecast for mid-week, with warnings likely to be issued on Tuesday covering Scotland, the North East and North West, he added.