Labour would have explaining to do if they reject SNP demands, Sturgeon says 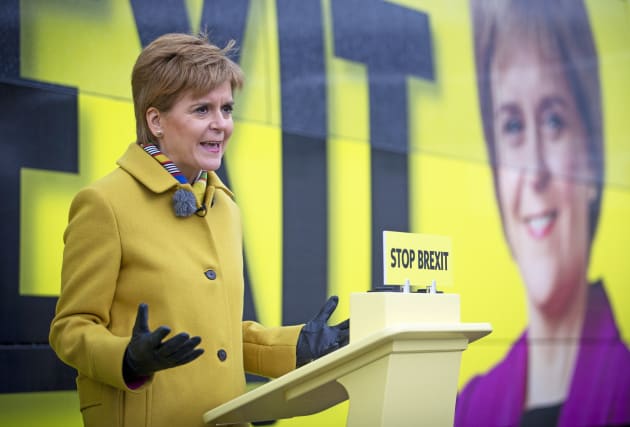 Nicola Sturgeon has said the Labour Party would have “questions to answer” if they do not accept the SNP’s post-election demands.

Speaking on the BBC’s Andrew Marr Show on Sunday, the First Minister warned senior Labour figures about rejecting negotiations with her party, which could risk putting Boris Johnson back into Downing Street in the event of a hung parliament.

Ms Sturgeon has previously set out “red lines” for SNP support, including an end to austerity, the scrapping of Trident and a second independence referendum.

Ms Sturgeon said: “We won’t put the Conservatives into government, but Labour would then have to get support to get their policies through.

“I would be offering that support.

“I don’t believe Labour, if against all the odds and what the opinion polls say, they get into a position to govern and implement their manifesto, they would turn their backs on that.

“My view here is that they should think about that prospect and imagine that on Friday Jeremy Corbyn and John McDonnell are in a position of being able to form a government, I don’t think they’re going to turn their backs on that.

“If they do, I think they’ve got some big explaining to do.”

The First Minister said it was not imperative that Labour leadership support independence, or even another referendum, but she called on them “respect the principle” of self-determination.

Speaking in the Sunday Mail, the First Minister asked for people who are against independence to vote for her party, saying their ballot does not mean they also support another referendum.

She said: “My message to them is that I don’t take their support for the SNP as necessarily support for independence.

“This election will not decide independence, it is about stopping Brexit and stopping Boris Johnson, it is about making sure the future of the country is decided here in Scotland, and I think that should be a point of unity.

“It is for the people to decide – they shouldn’t have that imposed on them.”

Labour candidate for Glasgow North East Paul Sweeney, speaking on Sunday Politics Scotland, said the Labour Party would not “stand in the way” of a second referendum if independence-supporting parties return a majority to Holyrood in 2021.

Mr Sweeney added: “Ultimately, we’re democrats. We respect the right of the Scottish people to self-determination.

“If there were an explicit mandate for that, say, after the Scottish elections in 2021, it wouldn’t be for any British government to stand in the way of that.”

However, Mr Sweeney said there was no clear mandate currently for a second poll and his party “would not be going into that at this stage”.

However, Ms Jardine did concede her party would back legislation for another Brexit referendum.