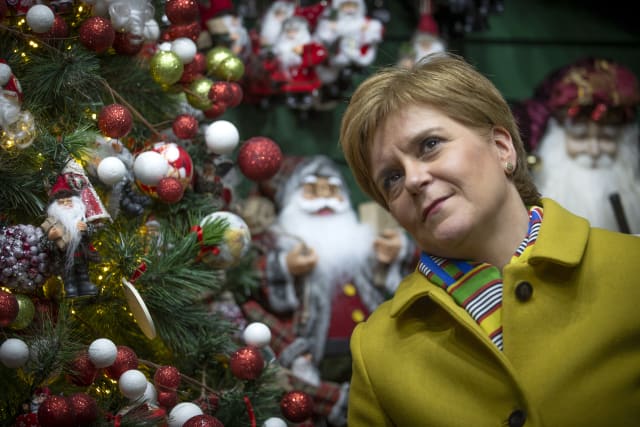 In the five years she has been SNP leader, Nicola Sturgeon has already led her party through two UK elections, as well as one Holyrood ballot.

She has been successful in each of these, with her party emerging as the largest in Scotland each time.

The latest ballot on December 12, her third General Election at the helm, looks like being no different for the 49-year-old – with the question being how much the SNP will win by in Scotland.

Ms Sturgeon became Scotland’s first female first minister and the first woman to lead the SNP in November 2014 – describing it as the “privilege of her life”.

She joined the SNP at the age of 16, with her decision to become involved in party politics inspired by another famous woman – Margaret Thatcher, then the prime minister of the UK.

As a teenager she said she had “a strong feeling it was wrong for Scotland to be governed by the Tory Government we hadn’t elected”.

Having joined the SNP in 1986, she first stood for election in the 1992 General Election when, running in the Glasgow Shettleston constituency, she was the youngest candidate in Scotland in the campaign.

She unsuccessfully stood again for Westminster in 1997 then, two years later, when the first Scottish Parliament elections took place, she was voted in to serve as an MSP for the Glasgow region.

Ms Sturgeon was in the running to be SNP leader in 2004 when John Swinney – who is now her Deputy First Minister – resigned from the post in the wake of European election results.

But when Alex Salmond announced he was bidding to be party leader – having previously said he would not take on the post – she joined forces with him and became his running mate.

Party members voted them in as leader and depute, and with Mr Salmond based in Westminster at the time it was Ms Sturgeon who led the party at Holyrood, challenging then-Labour leader Jack McConnell at First Minister’s Questions.

In 2007, when the SNP came to power at Holyrood, she won the Glasgow Govan constituency and also became health secretary as the SNP formed a minority administration in Edinburgh.

Four years later the SNP won a historic overall majority in the Scottish Parliament – an unprecedented victory that led to David Cameron conceding to SNP calls for an independence referendum.

Ms Sturgeon was a key part of the team that negotiated the terms of the referendum and was also a prominent figure in the campaign for a Yes vote.

Since becoming First Minister, she has followed through on her feminist principles by installing the first ever 50/50 gender-balanced Cabinet and also ensuring Holyrood passed legislation aimed at getting more women on to public-sector boards.

A formidable campaigner, after she took on the then-Scottish Secretary Alistair Carmichael in a television debate ahead of the independence vote one commentator said the “genteel Liberal Democrat” had been “disembowelled by a ferocious and merciless nationalist”.

Outside of politics she is an avid reader, who is known to make book recommendations to her one million-plus followers on Twitter.