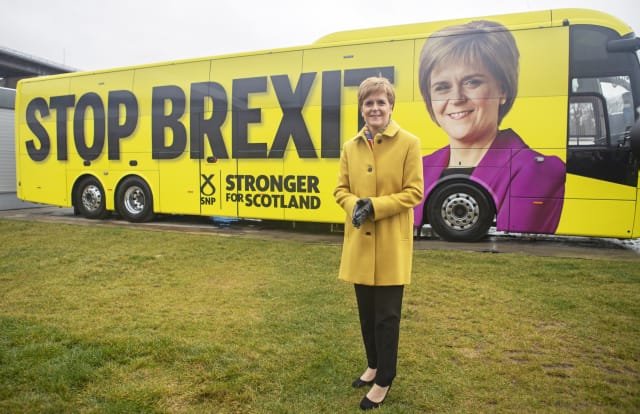 Nicola Sturgeon’s message this election campaign has been simple – for her the December 12 vote is a chance to stop Brexit and “put Scotland’s future in Scotland’s hands”.

She has used the campaign to push forward the SNP’s demands for a second vote on independence.

And while Thursday’s ballot is taking place at a time when her Scottish Government is coming in for criticism on issues such as health and education, the Westminster election means the First Minister has, by and large, been able to escape these issues on the campaign trail.

The SNP leader has sought to portray Boris Johnson as unfit to lead Britain, while talking up the prospect that the SNP could be part of a “progressive alliance” with Labour and others at Westminster.

Her hope is that there is a hung parliament, with Ms Sturgeon insisting there is “every chance” no party could be in overall control at Westminster on December 13.

In those circumstances she would seek to do some kind of deal with Labour – with their support for a second vote on Scottish independence in 2020 her number one demand.

Meanwhile, the SNP Government at Holyrood is already implementing policies in Jeremy Corbyn’s manifesto – such as free university tuition and free prescriptions – in Scotland.

And Ms Sturgeon has sought to persuade voters south of the border that some sort of arrangement between her party and Labour could be a better option than Mr Johnson staying on in Number 10.

With Brexit and Scotland’s place in the UK being at the heart of the campaign, she has also stressed the importance of this week’s vote – arguing that Scotland is “at a crossroads” and “facing two futures”.

Speaking as she launched the SNP manifesto in Glagsow, the First Minister warned: “In one future we will be governed by Boris Johnson and taken out of the EU against our will.

“We will be at the mercy of an increasingly right-wing Tory party that will let nothing get in the way of their extreme Brexit vision.”

She insisted: “People in Scotland have the right to consider an alternative future. One in which Scotland’s future is in Scotland’s hands, not Boris Johnson’s.”

That manifesto however was criticised by David Phillips, the associate director of the Institute for Fiscal Studies think tank, who said that “the SNP’s manifesto isn’t really about a plan of action for five years of governing the UK”.

Instead, he claimed it was more “about starting the process of leaving the UK in the next year” – as  he warned that an independent Scotland would have to “count its pennies and pounds” for at least the first decade.

Those criticisms however were dismissed by the First Minister, who said that while she had “the greatest of respect for the IFS” she believed there were “aspects that are not properly taken account of” in its analysis.