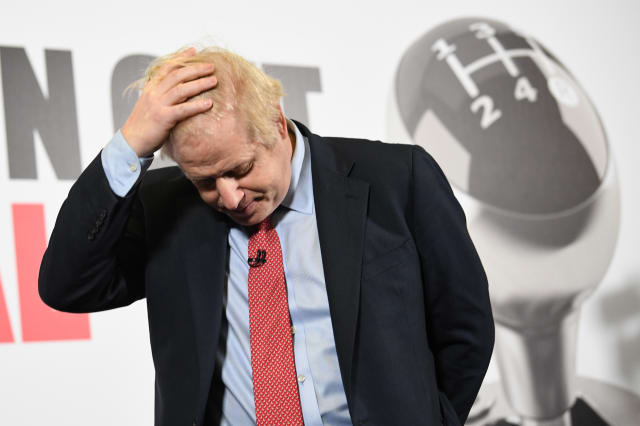 Boris Johnson has said questions about his trustworthiness which have dogged his General Election campaign make his “blood boil”.

The Prime Minister was judged to be less trustworthy than his rival Jeremy Corbyn by a margin of 38% to 48% in a snap poll after the two leaders sparred in a TV debate on Friday.

In an interview with the Daily Mail, Mr Johnson revealed his fury at the question which has dominated his campaign – and blamed deadlock in Parliament for his failure to deliver on his Halloween Brexit pledge.

“It was infuriating that I couldn’t deliver Brexit on October 31. But that was because Parliament passed a law, which was a constitutional innovation and abomination… forcing me to break my promise,” he told the paper.

“And so, when people talk about whether I can be trusted, it makes my blood boil because it was they that forced the Government to break its promise.

“They passed a law to stop it happening. And then they had the cheek to try to blame the Government. I think it’s absurd.”

Andrew Neil tore into him earlier this week for refusing to commit to an interview on his BBC show, telling viewers he wanted to put “questions of trust” to the PM.

Mr Johnson was previously laughed at by audience members in an ITV debate when he said the truth matters in the election.

His new comments came as leaked documents used by Labour as evidence the Tories are planning to sell off the NHS were linked to a Russian operation on Reddit.

The social media platform said it had banned 61 accounts after an investigation of suspect activity.

The campaign shared the same pattern of activity as a Russian operation dubbed “Secondary Infektion” uncovered by Facebook earlier this year.

Mr Corbyn used the leaked documents as evidence the Government was at an advanced stage of negotiations with the US to open up the health service to American pharmaceutical companies.

Reddit said it believed the documents were leaked as “part of a campaign that has been reported as originating from Russia”.

The revelation prompted fresh calls for the Government to allow a report detailing Russian interference in UK elections to be published.

Shadow transport secretary Andy McDonald said: “If we want to get to the bottom of the extent to which the Russian state interferes in elections, can we please publish the Intelligence and Security Committee report?

“Let’s get that out there. That should have been published ages ago.”

On Friday night Mr Johnson and Mr Corbyn were involved in a series of acrimonious exchanges over racism and anti-Semitism in the final televised debate of the campaign.

With less than a week left to polling day on Thursday, the two men traded accusations of a “failure of leadership” on one of the key issues inover the campaign.

A snap YouGov poll of 1,322 viewers following the debate narrowly gave victory to Mr Johnson by 52% to 48%.

Both sides will be relieved to have avoided any major slip-ups in the hour-long confrontation before a live BBC studio audience in Maidstone.

But with the Tories continuing to lead in the polls overall, they are likely to be the happier with the outcome.

The parties returned to the campaign trail on Saturday with Labour promising every bus in England will be electric-powered by 2030, reducing emissions by more than 70%.

The Tories are pledging extra cash for grassroots football to bolster the UK and Ireland’s bid for the 2030 World Cup, with an an extra £550 million over 10 years for community sports facilities.

The Liberal Democrats are promising to bring in “safe standing” areas at top-flight football grounds, saying they would offer fans more choice, a better atmosphere and cheaper tickets.

Mr Johnson had a kickabout with young football fans during a campaign visit in the North West on Saturday morning.

The Prime Minister donned his football kit for a 15-minute run-out at the Seashell Trust, a charity that helps children with severe learning difficulties based in Cheadle, near Stockport.