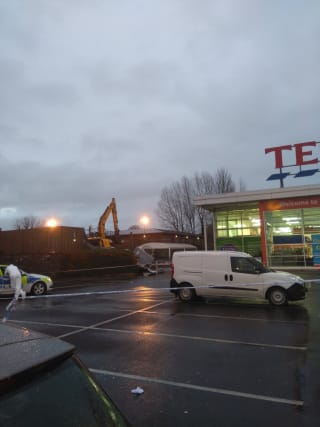 The mayor of Antrim and Newtownabbey has condemned the theft of an ATM unit from a Tesco supermarket.

Shortly after 3am police received a report that a digger had been used to steal an ATM unit from the supermarket in Antrim.

The machine was recovered “just a few miles away” about half an hour later.

Mayor Paul Michael told the PA news agency that the incident was “an attack on the whole community”.

He continued: “The location of (the) ATMs did not just service Tesco shoppers, but the residents of the whole town.

“A crime against the community.”

Mr Michael confirmed that the Tesco supermarket was open for business.

In a statement, Detective Inspector Richard Thornton appealed to owners of heavy plant machinery to secure the vehicles properly to prevent such incidents in the future, and asked the public to be aware of diggers on the roads in the evening or middle of the night.

In November, a man was charged over an attempted ATM theft that caused the collapse of a petrol station roof in Ballynahinch, Co Down.