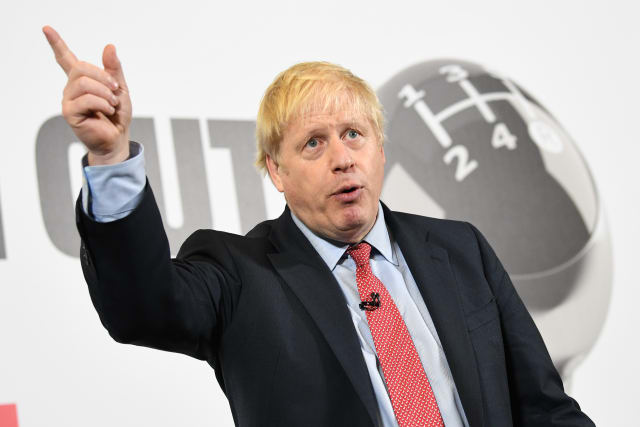 Boris Johnson has labelled Labour claims that his Brexit deal would lead to customs checks between Great Britain and Northern Ireland as “complete nonsense”.

Jeremy Corbyn said he had obtained a confidential government report which “drives a coach and horses” through the Prime Minister’s claim that there will be no border in the Irish Sea under his plan.

But Mr Johnson insisted voters should believe him when he says there will be no checks on goods going between Great Britain and Northern Ireland.

Asked about the Labour leader’s claims, Mr Johnson said: “I haven’t seen the document you’re referring to but that’s complete nonsense, and what I can tell you is that with the deal that we have we can come out as one whole UK.”

He later added: “They should believe exactly what I say, which is that there will be no goods going from GB to NI or from NI to GB because we are going to come out of the EU whole and entire, and that was the objective that we secured.”

Brandishing the document, titled Northern Ireland Protocol: Unfettered Access To The UK Internal Market, at a press conference in central London, Mr Corbyn said it was proof that there would be customs checks between Great Britain and Northern Ireland after Brexit.

“What we have here is a confidential report by Johnson’s own government, marked ‘official, sensitive’, that exposes the falsehoods that Boris Johnson has been putting forward,” he said.

“This is cold, hard evidence that categorically shows the impact a damaging Brexit deal would have on large parts of our country.”

The 15-page document appeared to be a slideshow prepared by the Treasury and is titled NI Protocol: Unfettered Access To The UKIM.

Mr Corbyn said the PM’s Brexit deal would be “disastrous for businesses and jobs all across the UK” and claimed the confidential report “confirms this”.

Mr Johnson has said there would be no checks between Northern Ireland and Great Britain under his exit terms, but Mr Corbyn said the document suggests that is not true.

The Labour leader said page five of the document states: “There will be customs declarations and security checks between Northern Ireland and Great Britain.”

But the Conservatives said the document presented by Mr Corbyn was only an immediate assessment of the PM’s deal and represents a “flash” and incomplete analysis of what the obligations of the protocol might be.

Last month the PM suggested his Brexit Secretary Stephen Barclay had been wrong to say goods between Northern Ireland and the rest of the UK would face checks as a result of the Brexit deal struck with the EU.

Mr Barclay previously told MPs that “some information” and “minimal targeted interventions” would be required on goods travelling between the two areas of the UK, due to Northern Ireland remaining aligned with Dublin and Brussels’ trading rules for agricultural products and manufactured items as part of the exit terms.

It came as the Tories were dealt a blow by Sir John Major who endorsed three ex-Conservative independent candidates running against Mr Johnson’s party in the election.

The Tory former prime minister said he would vote for ex-ministers David Gauke, Dominic Grieve and Anne Milton – who all lost the party whip earlier this year after rebelling on Brexit – if he lived in their constituencies.

The issues are likely to feature when Mr Johnson and Mr Corbyn go head-to-head again on Friday evening during a televised debate on ITV, with less than a week until polling day.

It comes after the PM was berated by Andrew Neil for refusing to do an interview on his BBC show.

Neil said that if the Prime Minister is expected to face the likes of Donald Trump and Vladimir Putin then he should be able to sit down for a half-hour interview with him.

Mr Johnson has been accused of “running scared” from scrutiny by avoiding in-depth questioning from the veteran broadcaster, even though rival leaders, including Mr Corbyn, have taken part.

A senior Tory source claimed the public are “fed up” with TV interviews that are “all about the interviewer and endless interruptions”.

Mr Johnson is said to have taken part in more than 100 interviews during the election campaign, and discussions on the Neil interview are understood to be ongoing.