Johnson and Corbyn trade accusations over racism and anti-Semitism 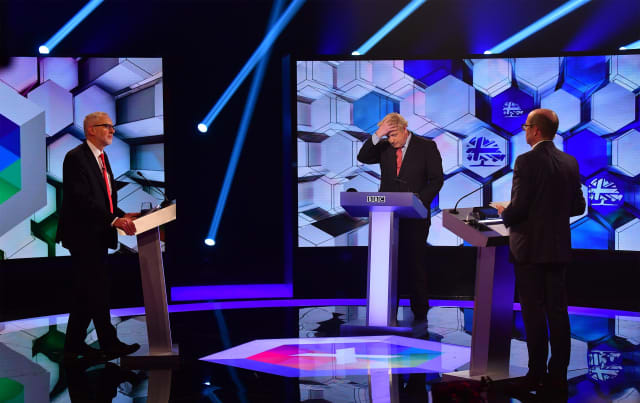 Boris Johnson and Jeremy Corbyn were involved in a series of angry exchanges over racism and anti-Semitism in the final TV debate of the General Election campaign.

The Prime Minister accused Mr Corbyn of a “failure of leadership” in his handling of anti-Semitism in the Labour Party.

The Labour leader shot back that he never used racist language and that he hoped Mr Johnson regretted his past comments.

Appearing before a live BBC studio audience in Maidstone, the two leaders clashed over Brexit, the NHS and terrorism.

But the sharpest exchanges were prompted by a question about their response to the issues of Islamophobia and anti-Semitism.

Mr Johnson said it was “extraordinary” the Chief Rabbi had felt the need to speak out during an election campaign about his fears for his community if Mr Corbyn became prime minister.

The Labour leader insisted there was “no place” in his party for anti-Semitism, adding in an apparent reference to Mr Johnson’s past comments: “I do not ever use racist language in any form to describe anybody in this world or in our society.”

Mr Johnson replied: “Mr Corbyn I am sure is very well-intentioned but in his handling of this particular issue, his unwillingness to take a stand to stand up for Jewish people in the Labour Party, his unwillingness to protect them, to put an arm round them, is in my view a failure of leadership.”

“I hope the prime minister understands the hurt that people feel when they hear remarks and articles that he has written in the past. I hope that he will regret those.”