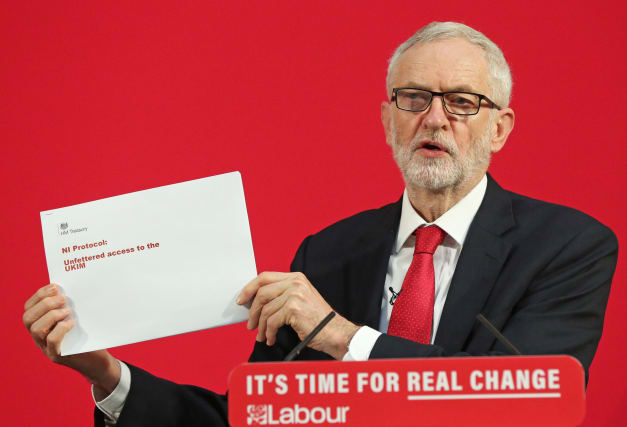 Jeremy Corbyn has said he has obtained a confidential report which “drives a coach and horses” through Boris Johnson’s claim that there will be no border in the Irish Sea under his Brexit plan.

The Labour leader said the leaked document, marked “official, sensitive”, provides the “cold, hard evidence” that the Prime Minister has been “misleading” people about his withdrawal deal.

Brandishing a document, titled Northern Ireland Protocol: Unfettered Access To The UK Internal Market, at a press conference in central London, Mr Corbyn said it was proof that there would be customs checks between Great Britain and Northern Ireland after Brexit.

“What we have here is a confidential report by Johnson’s own government, marked ‘official, sensitive’, that exposes the falsehoods that Boris Johnson has been putting forward,” he said.

“This is cold, hard evidence that categorically shows the impact a damaging Brexit deal would have on large parts of our country.”

The 15-page document appeared to be a slideshow prepared by the Treasury and is titled “NI Protocol: Unfettered Access To The UKIM”.

Mr Corbyn said Mr Johnson’s Brexit deal will be “disastrous for businesses and jobs all across the UK” and claimed the Government’s confidential report “confirms this”.

The document, he said, paints a “damning picture” of the Prime Minister’s deal, especially when it comes to Northern Ireland.

“We have now caught Johnson red-handed misrepresenting his own Brexit deal,” he told journalists.

Mr Johnson had said there would be no checks between Northern Ireland and Great Britain under his exit terms, but Mr Corbyn said the document suggests that is not true.

The Labour leader said page five of the document states: “There will be customs declarations and security checks between Northern Ireland and Great Britain.”

He added: “It is there in black and white. It says there will be customs declarations, absolutely clearly, for trade going from Northern Ireland to Great Britain.

“For trade going the other way, from Great Britain to Northern Ireland, there will be all of the above plus potentially damaging tariffs.”