I can’t get devolution restored on my own – Arlene Foster 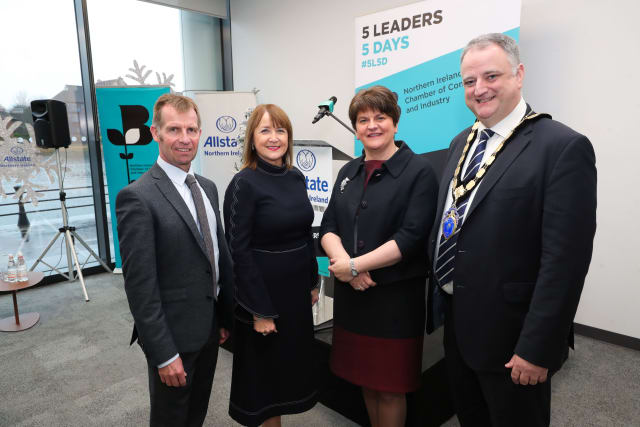 Arlene Foster has emphasised she wants to see devolved government restored, but warned her party cannot do it alone.

The Democratic Unionist Party leader was pressed by business leaders over the almost three-year devolution gap during election hustings in Belfast.

She was the final leader of the five main political parties to address the 5 Days, 5 Leaders series organised by the Northern Ireland Chamber of Commerce.

Mrs Foster said she wants to see Stormont working again, but cautioned: “I can’t do it on my own.”

“The system of government is such that it has to be the largest unionist party and the largest nationalist party, therefore I hope that after this election is out of the way, that we can get going again.”

“I got exactly the same thing from your opposite number at this same event … you’re asking them to do it, they’re asking you to do it, one of you is going to have to do it – so what are you going to do?”

Mrs Foster replied: “I think there is a renewed optimism about a shared space, I hope that Michelle shares that.

“There has been division created in Northern Ireland over the last three years, and I really regret that, because I think what we showed in the ten years before that, despite all of the problems and difficulties, we were able to work together for the good of everybody.”

However Mrs Foster warned “everything isn’t going to be rosy” if the Assembly does return.

“When I listen to some people, they think the Executive is going to come back and all of a sudden everything is going to be fine, it’s not, we have a big job of work to do.

“But I’m up for that big job of work, I believe she (Michelle) is as well. So we need to find the common ground and space in the middle.”

Mrs Foster also acknowledged that mistakes had been made in past incarnations of the Assembly.

“There’s a lot of people say the Assembly didn’t deliver when we were there, I fundamentally believe we did deliver,” Mrs Foster said on Friday.

“Did we make mistakes, yes we did make mistakes, but we’re all human and I think it’s important that we look back and try to fix, and learn and adapt from things that didn’t go right.

“But to take the good things out of what happened the last time, and learn to work more collaboratively.

“You have a willingness and an openness from me to do that and I hope that the other party leaders will feel the same.”